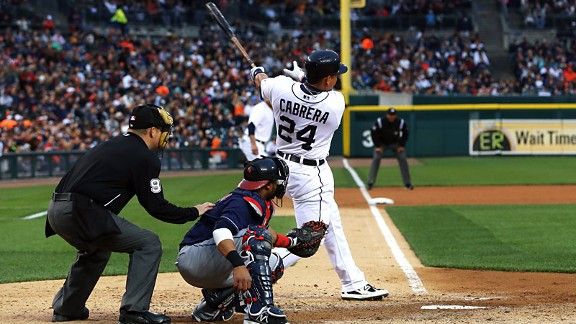 Miguel Cabrera is re-writing the record books in his first 10 MLB seasons.Thursday marks the 10-year anniversary of Miguel Cabrera’s MLB debut. To celebrate Cabrera’s achievements, we’ve attempted to put the anniversary in context within the history of baseball.

It’s safe to call Cabrera one of the most dominant hitters of the last decade. In the 10-year span since being called up to the majors, Cabrera leads all players in RBI, is second in runs and doubles, and trails only David Ortiz, Adam Dunn and Albert Pujols in home runs.

Since joining the Detroit Tigers in the 2008 season, he has also been one of the best clutch power-hitters in that span, leading MLB with 14 game-tying or go-ahead homers in the ninth inning or later.

Cabrera is currently hitting .463 with runners in scoring position, the best of any player in baseball. If he can sustain that average, it would be the highest single-season batting average with RISP since George Brett hit .469 during his 1980 MVP season.

According to the Elias Sports Bureau, Cabrera is one of six players in MLB history with 300 home runs and 1,100 RBI at the time of the 10-year anniversary of a debut, joining Mark Teixeira, Pujols, Manny Ramirez, Frank Thomas and Hank Aaron.

The Tigers slugger has 1,194 career RBI, tied with Lou Gehrig for the third-most by a player through his first 10 seasons, trailing only Albert Pujols and Hall-of-Famer Al Simmons. Cabrera is currently in his 10th season and needs just 94 more RBI the rest of the season to pass Simmons on this list.

Cabrera has his sights set on another Triple Crown performance this season, leading the American League in batting average and RBI, and tied for second in home runs. If Cabrera is able to pull off a repeat performance, he would become the first player in MLB history to win the Triple Crown in consecutive seasons.

In fact, no Triple Crown winner has even finished first in more than one of the three categories in the season following his Triple Crown.