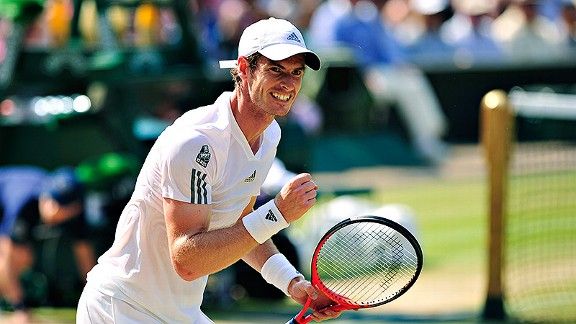 Andy Murray had a lot to be excited about in his victory.

It was a long time coming for Andy Murray, who finally won his first Wimbledon. Let’s run through some of the highlights of his victory on Sunday morning over Novak Djokovic.

Murray became the first Gentleman from Great Britain to win Wimbledon since Fred Perry in 1936.

Murray has now won two of the last three Grand Slams he’s played, with both wins being over Djokovic.

It was Murray’s 18th straight grass-court match win. He’s 8-11 vs Djokovic, but 2-0 against him on grass courts.

This marked the second straight year that the Wimbledon champ had to come back from a 2-0 deficit earlier in the tournament. Roger Federer did so last year.

Djokovic was the only top-15 seed that Murray beat en route to winning the title (Djokovic's last four matches were all vs top-15 seeds).

This marked the first time that Djokovic lost a Grand Slam match in straight sets since the 2010 Wimbledon semis against Tomas Berdych.

Djokovic had his serve broken seven times during the match. He had it broken only six times at this year’s Wimbledon entering the Final.

This marked the sixth straight year that the No. 1 seed did not win Wimbledon.

It took Murray eight appearances at Wimbledon to win his first title. The only mens' player to take longer was Goran Ivanisevic, who won in his 14th appearance in 2001.

Murray also became the first player to win his first Wimbledon title the year after reaching his first Final since John McEnroe in 1981.