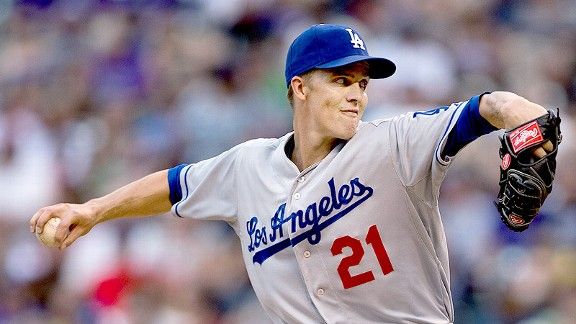 2. What makes the Dodgers' 14-game road win streak even more impressive is the fact that they were eight games under .500 on the road prior to the streak.

According to the Elias Sports Bureau, it’s just the second time in MLB history a team has won 14 straight road games after being at least five games under .500 on the roar prior to the streak. The 1912 Washington Senators were the first to do so.

Quick notes on the streak:

• The Dodgers have trailed six times during the win streak. Their biggest deficit was on July 23 in Toronto when they trailed the Blue Jays 8-3 with just nine outs left before rallying for seven runs.

• They were 4½ games back of the Arizona Diamondbacks after losing to the San Francisco Giants on July 6. Los Angeles enters this game with a 5½ game lead in the NL West.

3. Zack Greinke was supposed to start Sunday but Stephen Fife was called up to pitch that game so Greinke could be given an extra day of rest.

Dodgers manager Don Mattingly said that he “wanted to keep his starting pitchers fresh and rested.”

Greinke has been a much different pitcher on the road than at home. He is 3-2 with a 4.57 ERA in eight road starts compared to 5-1 with a 2.56 ERA in nine home starts this season.

The Dodgers have won seven of Greinke’s last eight starts (he is 5-1 with a 2.73 ERA during that stretch). In his last seven starts against the Cardinals, Greinke is 6-1 with a 1.88 ERA.

4. The Cardinals are on the last leg of a 15-game stretch against the four other NL playoff teams (if the season ended today) – Atlanta Braves, Pittsburgh Pirates, Cincinnati Reds and Dodgers.

St. Louis started this stretch 0-7 but has won three of its last four games, scoring 44 runs over that span.

Only A.J. Burnett has more strikeouts with a curveball this season than Wainwright’s 77.