The Blue Jays' Brett Lawrie went single-double-triple in Monday's 3-1 win over Seattle, becoming the first Toronto hitter this season to even have a triple and a double in one game. Had he also homered, Lawrie would have recorded the Jays' first cycle since Jeff Frye on August 17, 2001.

In Tuesday's game, the Astros didn't need to steal any bases (although they did have two). The Red Sox-- specifically catcher Ryan Lavarnway-- were giving away bases.

Handling knuckleballer Steven Wright's first career start, Lavarnway was charged with four passed balls in the first inning alone, tying the major league record for one inning. It's happened twice before in the modern era, and also with knuckleballers: On August 22, 1987, the Rangers' Geno Petralli committed four while catching Charlie Hough; and on September 10, 1954, the Giants' Ray Katt did it while trying to catch Hoyt Wilhelm. 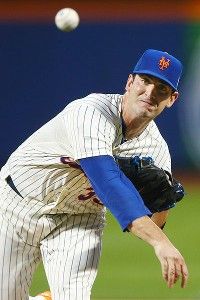 Matt Harvey threw his 1st career shutout on Wednesday against the Rockies.

Matt Harvey, on the other hand, threw his first career shutout (and first complete game) on Wednesday, holding the Rockies to four singles as the Mets won 5-0. He also went through a start without walking a single batter, the eighth time this season he’s done that. Only Bartolo Colon and Hisashi Iwakuma (with 10 each) have more walk-less starts this season, of any length.

Harvey also threw nine scoreless innings with zero walks against the White Sox on May 7, but got neither a decision nor a complete game because the Mets didn't score either and the game went to extras. Clayton Kershaw and Chris Archer are the only other pitchers with multiple such games this season.

He's the first Mets pitcher to have multiple starts of 8+ scoreless, walk-less innings since Jason Isringhausen in 1995; and the first with a pair of NINE-inning games since Craig Swan in 1979.

Thursday's limited slate brought us a matchup between Detroit and Cleveland at Progressive Field. Although the outcome wasn't in much doubt when the Tigers took an 8-0 lead after 3½ innings, the notable part of the boxscore was that both cleanup hitters (Prince Fielder and Asdrubal Cabrera) had two doubles and two runs driven in.

Strangely, it's only the second game in the past 20 years where BOTH cleanup hitters have had at least two doubles and two RBI. The other occurred when Fielder "teamed up" with the Rangers' Adrian Beltre to do it on May 19.

On Friday the Tigers had their 12-game winning streak (which matched their longest since 1934) on the line against the Yankees and Mariano Rivera. The Tigers, however, countered with Miguel Cabrera, who launched his 34th home run of the year - but first in the ninth inning or later - to tie the game.

It was only the second homer Rivera allowed to the Tigers in a save situation. Bobby Higginson hit the other way back on July 6, 1999.

In Sunday's finale between the Tigers and Yankees, the visitors from Motown trailed by two runs after eight innings. Enter Rivera. Enter Cabrera.

Mariano Rivera, 2 HR Allowed
In An Inning As Reliever

Same result as Friday as Cabrera hit his 36th home run of the season. By doing so, he became the first player ever to homer off Rivera in consecutive at-bats, and one of just five players to have multiple homers against Rivera.

Later that inning, Victor Martinez hit a solo homer to tie the game, handing Rivera his third consecutive blown save. Something he had never done in his career to that point.

Rivera was still officially the pitcher of record when Brett Gardner hit his first career walk-off home run in the bottom of the inning. This was the 18th time Rivera has won a game after blowing a save, and the first since August 13, 2007.