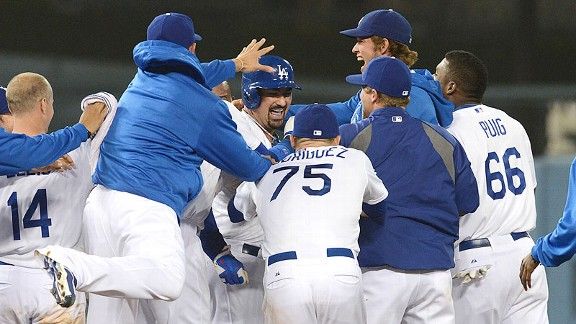 The Dodgers are 40-8 since June 22, tied for their best 48-game stretch in franchise history

The Los Angeles Dodgers had their first off day on Thursday since July 29, and it was well deserved.

The Dodgers are the hottest team in baseball, having won a season-high eight consecutive games, the longest active win streak in the MLB.

According to the Elias Sports Bureau, this marks just the sixth instance since 1900 in which a National League team recorded a stretch of 40-8 or better in a season and the first time since the 1944 St. Louis Cardinals.

Here’s a deeper statistical look at some of the major factors of their red-hot stretch.

The Dodgers have gotten timely hits, recording a .333 team batting average with runners in scoring position in August. That is tied with the Cardinals for the highest such average in the majors this month and is by far their highest average in a single month this season.

From the start of the season through the end of July, Los Angeles hit just .247 with runners in scoring position, which ranked 19th in the majors.

A lot of those hits have come from Adrian Gonzalez, most recently with a walk-off RBI double in an extra-inning win over the Mets on Wednesday. Gonzalez has a team-high 15 hits that put his team in the lead this season.

Gonzalez ranks fourth in the majors and second in the National League with 4.37 Win Probability Added this season.

Win Probability Added measures the value of every play in a baseball game, using historical play-by-play data to figure out how much each play contributed or hurt his team’s chances of winning.

After his strong start to the season, Yasiel Puig cooled off toward the end of July, hitting .265 in his final 14 games that month.

However, the Dodgers outfielder has regained his hot bat in August, hitting safely in 11 of 13 games this month and posting a .383 batting average. His .500 on-base percentage this month trails only Mike Trout (.552) and Matt Holliday (.537) among qualified players.

While the Dodgers sluggers have received most of the attention during their successful run, second basemen Mark Ellis has quietly been one of the team’s most valuable players. The Dodgers are 51-24 when Ellis starts this season, compared to just 19-26 when he doesn’t.

Since June 22, Ellis actually has the second-most Wins Above Replacement among Dodgers position players, trailing only Hanley Ramirez over that span. He’s recorded a .341 on-base percentage and .748 OPS with three home runs and 21 RBI over that span.

Yes, Clayton Kershaw is 6-2 with a 1.57 ERA during this stretch, but also of note is the Dodgers bullpen.

The Dodgers relief pitching has been really good. Since July 5, Dodgers relievers have allowed only 16 earned runs in 108 innings, good for an MLB-best 1.33 ERA over that stretch.

The Dodgers will begin a seven-game road trip Friday night against the Phillies. The Dodgers have played well in Philadelphia of late, winning four straight and five of the past six at Citizens Bank Ballpark.