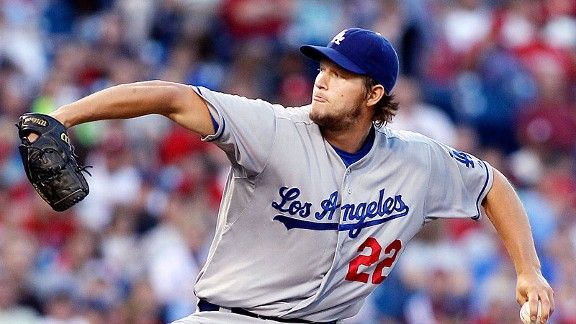 Clayton Kershaw shut down the Phillies as he recorded his first career win against Philadelphia.

Their current 10-game winning streak is their longest since 2006 when they won 11 straight.

A large part of their success is because of great pitching. Since their run started on June 22, the Dodgers lead MLB in team ERA (2.45) and are second in opponent batting average (.229) and shutouts (8).

Saturday marked their 16th shutout of the season, which is the most in MLB.

Clayton Kershaw pitched another gem as he recorded his sixth start of eight-or-more scoreless innings this season. No other pitcher in MLB has more than three such starts.

Kershaw had a lot of success staying outside as 32-of-48 pitches on the outer half went for strikes, and he recorded six of eight strikeouts on pitches in that zone.

On the season, Kershaw's .172 Opp BA on pitches in the outer half is tied for best in the National League with Matt Cain.

The win also marked his first career victory over the Philadelphia Phillies after entering 0-4 in eight previous starts. That leaves the Atlanta Braves as the only National League team that Kershaw has not defeated.

DID YOU KNOW: The last time the Dodgers shut out the Phillies in consecutive games was May 23 and 24, 1983 in Philadelphia. The winning pitchers those days were Fernando Valenzuela and Alejandro Pena who each threw complete game shutouts against the eventual National League pennant winners.