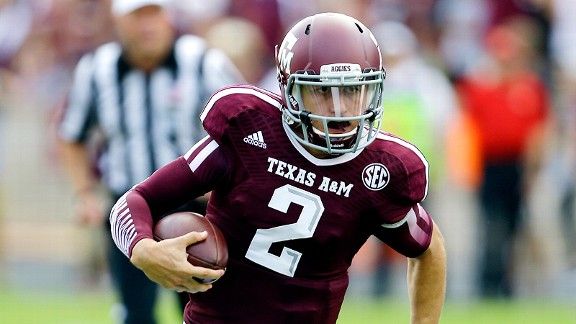 Johnny Manziel is tough to stop once he takes off.In Nick Saban’s news conference Monday, he was asked if he would like to make Johnny Manziel a pocket passer.

Saban’s response: "You are not going to make him be a pocket passer because if someone is not open, he is not going to throw them the ball. He is going to extend the play to run or to make a play throwing the ball.”

Is this true? Is it possible to keep Manziel in the pocket?

Answer: Manziel is almost impossible to keep in the pocket.

Saban saw Manziel’s ability to make plays out of nothing firsthand. Against the Tide, Manziel completed all six of his passes outside the pocket for 78 yards and had an additional 94 rushing yards on scrambles. It was the most such yards that the Tide have allowed in a game in the past four seasons.

Florida and LSU were able to contain Manziel for a half. What did they do?

Answer: To start, Florida and LSU had talent.

They had a combined 11 defensive players selected in the first five rounds of the NFL draft, including four players taken in the first round.

Manziel Vs. 4 Or Fewer Pass-rushers

The Aggies had double-digit leads against both LSU and Florida in the second quarter, in part because Manziel made plays with his legs. He was a combined 6-of-9 passing outside the pocket for 80 yards and five first downs. He also had eight scrambles for 42 yards, including two scrambles for first downs.

But in the second half, LSU and Florida adjusted by sending fewer pass-rushers and having a player spy Manziel.

Manziel had a combined 38 yards outside the pocket in the second half.