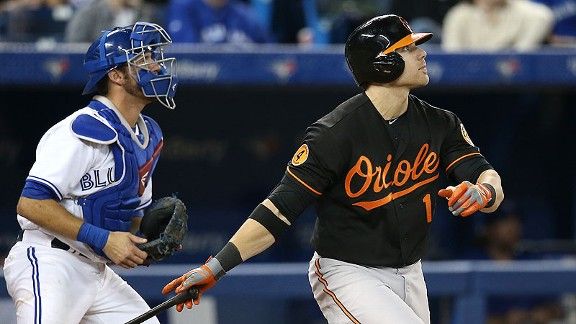 Chris Davis is only the second Orioles player to hit 50 homers in a season.Chris Davis isn't just having an MVP-caliber season. He's having the type of season we've only seen twice previously in major league history.

Davis is the first player with 50 homers in a season since Jose Bautista in 2010, and the first left-handed batter to do so since Prince Fielder in 2007.

Davis tied Anderson for the Orioles franchise record for homers in a season.

Home runs by Davis have usually led to wins for the Orioles. The Orioles are 30-17 in games in which Davis has a homer this season, including 3-0 when he has multiple home runs. They are 47-52 in all other games.

Davis has had a spectacular season, but does he deserve the AL MVP award?

His power numbers suggest he does, but consider this: Davis doesn't even have the most Wins Above Replacement on his own team. Entering Friday, Manny Machado (6.6) had a slight edge over Davis (6.5) in WAR. Davis ranked sixth in the AL among hitters, also trailing Mike Trout, Josh Donaldson, Robinson Cano and Miguel Cabrera.