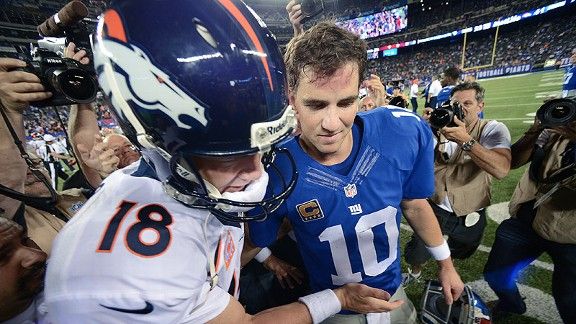 Peyton Manning got the better of his younger brother, again.

Peyton Manning improved to 3-0 all-time against his younger brother Eli and the two quarterbacks have begun the season by taking their teams in opposite directions.

At game’s end on Sunday, Peyton Manning had the NFL lead in touchdowns and Eli Manning was at the top of the list in interceptions.

The best of starts for Peyton Manning

Peyton Manning has 769 passing yards, nine touchdowns and no interceptions through two games.

The Elias Sports Bureau notes that is the most passing yards and most touchdown throws without an interception through two games in NFL history.

The nine touchdowns are tied for the most through the first two games of a season for any NFL quarterback, matching the mark set by Charley Johnson in 1965 and tied by Drew Brees in 2009.

The Broncos are the sixth team in NFL history to score at least 90 points through two games, the first since the Super Bowl champion New Orleans Saints in 2009.

The worst of starts for Eli Manning

Manning’s deep ball was a big problem, as he completed 1-of-7 passes deeper than 20 yards downfield for 51 yards and two interceptions. Manning threw two interceptions all of last year on those throws, completing 41 percent of them.

Elias notes that the Giants 10 turnovers are their most through two games in team history.