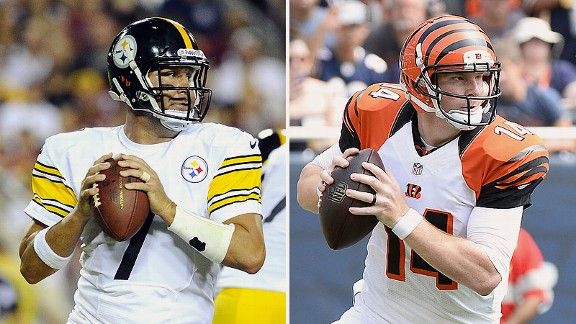 Ben Roethlisberger (left) and Andy Dalton (right) look to lead their team to victory on MNF.The Pittsburgh Steelers and Cincinnati Bengals meet for the 86th time in a series that started in 1970 (8:30 ET on ESPN). The Steelers are looking for their fourth straight win in Cincinnati and 11th in the last 12 meetings in the Queen City.

Here are five stats Mike Tirico and Jon Gruden will be talking about during the game.

1. One of these teams will be 0-2 after the game. History says an 0-2 start means different things for these teams.

Over the last 25 years, the Steelers have started 0-2 four times. They finished with a winning record in each of the four seasons, making the playoffs three times.

By contrast, the Bengals have never finished with a winning record or made the playoffs in any of the 15 previous seasons in which they started 0-2.

Most Career Wins
vs Bengals, By Starting QB

2. Ben Roethlisberger is going for his 14th win against the Bengals, which would break a tie with Warren Moon for the most wins by a starting QB against Cincinnati.

He may need more help from a running game that has gone seven straight games without 100 yards, one shy of the longest such streak in franchise history set back in the 1930s.

3. A.J. Green is coming off a monster Week 1 performance in which he caught two touchdowns and set a franchise record for most receiving yards in a season opener (162).

4. Andy Dalton is just 1-3 against the Steelers. While he won the last time out, he did struggle, throwing two interceptions with no touchdowns. Overall, Dalton has more interceptions (five) than touchdown passes (four) in his career against Pittsburgh.