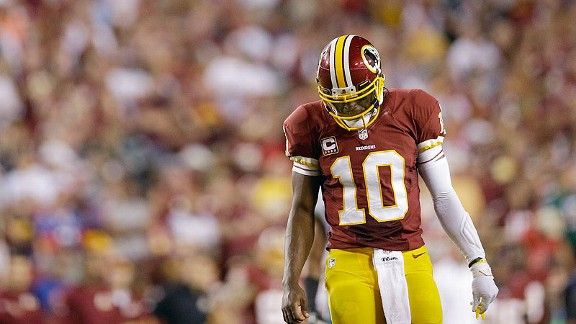 It has been a rough start to the season for Robert Griffin III.Robert Griffin III was “all-in” for Week 1 this offseason with his recovery from an ACL injury. Now that’s he back though, the Washington Redskins don’t appear to be all-in on him.

Mike Shanahan hasn’t been putting Griffin in a position to run this season, and it’s hurting the Redskins’ offense. Below is a look at how:

The Redskins have used the zone-read on only five rushes this season, all of which have been handoffs to Alfred Morris.

Griffin has attempted 16 play-action passes this season. Last season he averaged 10 per game.

A look at the passing charts below shows that when Griffin uses play action, he likes to stretch the field. 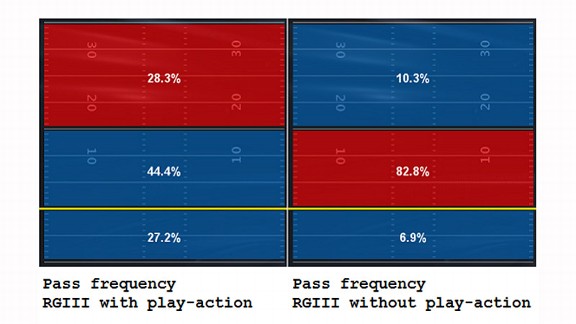 In his career, 73 percent of his attempts 15 yards or more downfield have been set-up with a play fake.

With less play action this season, Griffin hasn’t had much success throwing long. Griffin is 6-of-16 (38 percent) passing 15-plus yards downfield through Week 2.

In his career, Griffin has completed 58 percent of those attempts when using play action (2-of-4 this season). Without play action, Griffin’s completion percentage drops to 42 percent (4-of-12 this season).

IT ALL EQUALS MORE PRESSURE

The zone-read has been successful in the NFL because with a dual-threat quarterback, defenses and potential pass rushers have to freeze to read a play.

This is particularly evident on rushes. The zone-read in the NFL has led to an average of 4.3 rush yards before first contact the last two seasons, compared to a 2.6 average on non-zone-reads.

The zone-read can also keep quarterbacks from seeing too much added pressure in the passing game. This was especially true for last season’s Redskins.

Griffin faced at least five pass rushers on a league-low 21 percent of dropbacks last season and was able to hold onto the ball for an average of 3.4 seconds before passing, scrambling or taking a sack.

This season Griffin has faced added pressure at double the rate of last season, and he’s been forced to get rid of the ball quicker on those plays, an average of 3.0 seconds per dropback.

Although it seems like an easy decision to let Griffin run more, doing so brings in a new set of risks.

Last season, Griffin took contact on 55 of his 72 designed runs (76 percent). That works out to an extra three hits per game.

If the Redskins want to turn the offense around, that may be a risk they need to take.