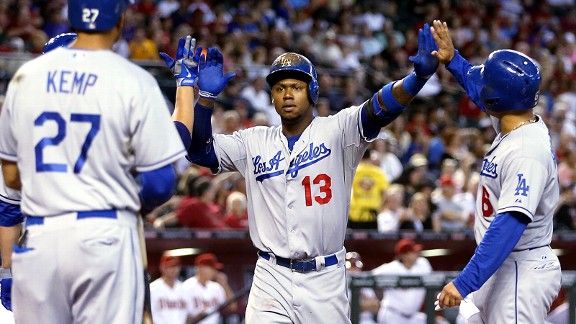 Hanley Ramirez has been an offensive catalyst throughout 2013.

The Los Angeles Dodgers were not in any sort of position to anticipate being the first major-league team to clinch a playoff spot just a few months ago.

But a remarkable turnaround propelled them to their first NL West title since 2009.

Yasiel Puig and Clayton Kershaw have gotten much of the attention this season, but it was appropriate that Hanley Ramirez had such a big game in the division clincher, with a pair of home runs.

The Dodgers are 49-24 in Ramirez’s 73 starts this season. Ramirez has the highest batting average (.351) and slugging percentage (.656) of anyone with at least 300 plate appearances this season. Our video-review data has him registering a “hard-hit ball” in 30 percent of his at-bats, also the best in the majors.

Ramirez is currently hitting .351 with 20 homers. If he can maintain a .350 batting average, he’d be the first shortstop to hit at least .350 with 20 homers in a season since current ESPN baseball analyst (and former Dodger) Nomar Garciaparra in 2000.

The Dodgers have also been a much better team when Mark Ellis has been next to Ramirez playing second base. They are 65-35 when Ellis plays. The key isn’t his offensive performance, but his defense.

What were the most prominent wins of the 2013 season?

Opening Day would be one—when the Dodgers beat the Giants 4-0 behind both the arm and the bat of Clayton Kershaw, who pitched a shutout and hit the go-ahead home run in the eighth inning.

But the Dodgers didn’t really take off until the arrival of Puig. In Puig’s second game on June 4, he became the second player in major-league history with a two-homer, five-RBI game within the first two games of his career. The other was Dino Restelli for the 1949 Pirates.

The most dramatic among many dramatic comebacks during the 42-8 stretch that put the Dodgers in prime position was a 7-6 win over the Rays on August 9, a game won with four runs in the bottom of the ninth against Rays closer Fernando Rodney (who committed the game-ending error).

Another would come five days later against the Mets, when Andre Ethier hit a game-tying homer in the ninth inning and Adrian Gonzalez drove in Puig with a game-winning double in the 12th.

The Elias Sports Bureau noted that this is the earliest the Dodgers have clinched a postseason berth by calendar date since the Brooklyn Dodgers clinched the National League title on September 8, 1955. The Dodgers went on to defeat the Yankees 4-3 in the World Series.

The Dodgers are the fifth team in the Divisional Era (since 1969) to win a division in a season in which they were at least 12 games under .500 at one point.

The Dodgers are the third team in major-league history to be in last place on July 1 and win their division, joining the 1973 Mets and 1995 Mariners.

The Dodgers were 47-47 at the All-Star Break, becoming just the sixth team in the Wild Card Era to win a division title after entering the break with a non-winning record. None of the previous five teams went on to make the World Series.