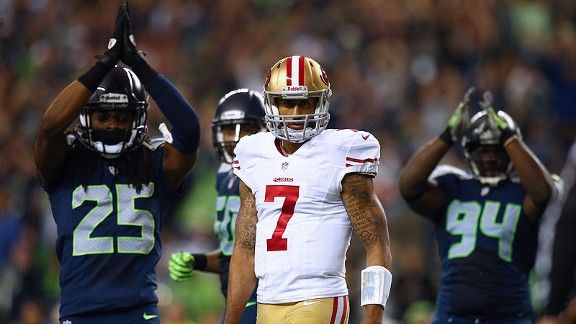 After a breakout season in 2012, teams are finding ways to stop Colin Kaepernick.

49ers QB Colin Kaepernick has struggled in his last two games after looking like an elite quarterback down the stretch last season.

What are Kaepernick and the 49ers doing differently this season, and why is he struggling lately? And how did the Rams contain him last season?

Kaepernick is 0-for-9 on throws at least 15 yards downfield over his last two games.

In every other start in his career, Kaepernick has completed at least two passes on those throws.

Kaepernick has already thrown as many interceptions on throws at least 15 yards downfield this season (two) as he did all of last season.

Last season, Kaepernick's first as a starter, teams often loaded the box against the running quarterback and running back Frank Gore.

Kaepernick took advantage with his arm. But this season, teams have adjusted and aren't loading the box as often because they are aware of Kaepernick's ability to also beat teams by throwing the ball.

Last season, defenses had seven or more defenders in the box on 53 percent of Kaepernick's drop backs.

This season, his opponents have put seven or more defenders in the box on only 43 percent of his drop backs.

49ers not running as well or as much

The Rams sent five or more pass-rushers on 60 percent of Kaepernick’s drop backs in their last matchup (Week 13 last season), the highest rate in any start of his career.

The strategy worked to force quick throws, as his average pass length and time in the pocket during the game were the lowest in any start of his career.

The longest pass Kaepernick attempted in that game was 16 yards downfield, and it's the only start in his career in which he didn't attempt at least one pass more than 20 yards downfield.