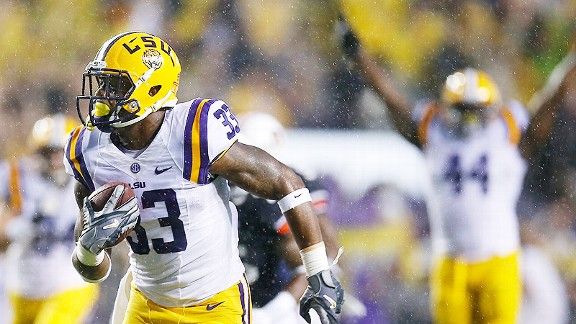 Jeremy Hill's rushing, especially in the first quarter, has fueled the LSU offense.

When the LSU Tigers face the Georgia Bulldogs this Saturday in Athens, the Tigers will rely on a much-improved offense. LSU enters Saturday having scored at least 35 points in each of its first four games of a season for the first time in school history.

The running game, led by Jeremy Hill, has been the foundation of the team’s offensive success. Only 14 teams in the nation run the ball a higher percentage than LSU’s 62 percent, and Hill has been one of the best backs in the country since returning from suspension.

Part of LSU’s success has been its ability to get early leads, with its running game serving as the offensive catalyst.

LSU is one of just eight FBS teams not to trail all season, outscoring opponents 62-3 in the first quarter. Five of those first-quarter touchdowns have come on the ground, tied for the most in the FBS.

Hill has led the first-quarter dominance. In each of the last two weeks, he’s rushed for touchdowns on each of LSU’s first two drives.

On two game-opening drives this season, Hill has four carries for 112 yards, including 58- and 49-yard TD scampers against Kent State and Auburn. Hill also scored on his first touch of the season, a three-yard TD in Week 2 against UAB.

What Hill does best

Hill has bolstered LSU’s offense with his explosive running ability and nose for the end zone. He is averaging 8.3 yards per rush and his 12 rushes of at least 10 yards are the third-most in the SEC. His six rushing touchdowns lead the SEC.

Opponents have been prepared for LSU’s running game even if they can’t stop it. Over 44 percent of LSU’s carries this season have been against at least eight men in the box. Alabama is the only other SEC team that faces a loaded box more than 40 percent of the time.

Jeremy Hill This Season
vs 8+ Defenders in Box

Hill’s bruising style has allowed him to thrive despite this defensive strategy.

His average of 5.3 yards after contact per rush is third-best among BCS-AQ players (minimum 40 rushes), and he is the only player in FBS with three 30-yard runs against a loaded box.

Hill attacks the opponents’ defensive line head-on, with more than 60 percent (27 of 42) of his rushes this season up the middle. He averages nearly 11 yards per rush on those carries, compared to four yards per rush when going left or right.

However, last week Georgia did hold a North Texas team that was averaging 174 rush yards per game to only seven yards on 25 carries.

This will be the first meeting between LSU and Georgia since the 2011 SEC Championship game when the Tigers ran for 207 yards in a 42-10 win.

Georgia must improve on that performance in order to win this weekend -- LSU has won 25 straight games dating back to 2007 when rushing for at least 207 yards.