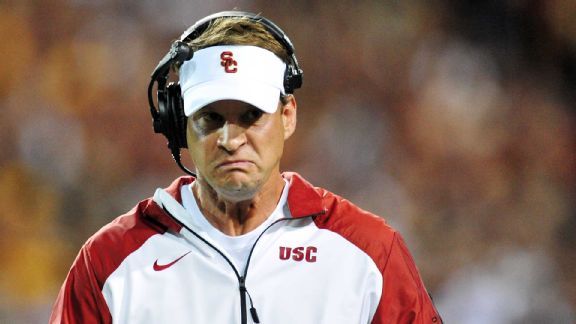 Lane Kiffin has been let go as head coach in the middle of USC’s worst stretch of games in years.

Kiffin, who left as head coach at Tennessee after the Vols’ 7-6 season in 2009, has since accumulated a 28-15 record for the Trojans. However, this storied program has lost seven of its last 11 games and is on its worst stretch since the 2001 season, the last time that the program didn’t manage a winning season.

Let’s take a closer look at USC’s struggles during the Kiffin Era.

In the last two seasons, USC is 5-6 in the Pac-12 and have lost all four of its games against ranked opponents.

They are 0-2 in conference play this year and have lost three out its last four road games, both firsts for the team since 2001, the first season under Pete Carroll.

Offensively, USC has compiled a 30.6 QBR this season, which ranks 113th out of 126 FBS schools. On the other side of the ball, the Trojans have allowed 62 points twice in their last ten games, a feat which no other FBS team has done in the same span.

For the first time in the Lane Kiffin era, this season’s Trojans have a higher percentage of 3-and-outs (in 34 percent of offensive possessions) than scoring drives (29 percent).

USC’s on-field struggles could be largely due to off-field issues with recruiting and NCAA sanctions, both of which have made it difficult to field the national powerhouse team that USC fans have become accustomed to.

In 2011 USC landed the fourth best recruiting class despite NCAA sanctions. Quarterback Max Wittek was the prized possession of that class.

USC's 2014 recruiting class is not in the top 40 right now according to ESPN.com (Tennessee, Kiffin’s previous team, is third).

The Trojans were hit with severe NCAA sanctions in June of 2010, a few months after Kiffin arrived, making it difficult for him to field the best team possible.

Each year for three years, USC's annual scholarship limit was reduced, limiting the Trojans to 75 scholarship players on the roster each season, 10 fewer than the maximum allowed for an FBS team. The penalties end after the 2014 season because USC delayed implementation by appealing.

USC played at Arizona State on Saturday night with 56 recruited scholarship players, compared to the 85 that most FBS schools field each week.