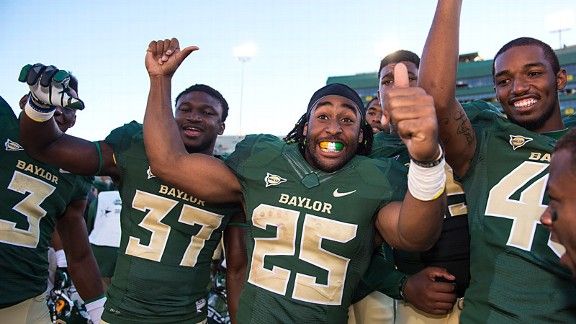 Baylor has rolled through the easy part of its schedule and looked better than it did a year ago.For the third consecutive season, Baylor is off to a 3-0 start against overmatched opponents. Unlike in recent seasons, the Bears' defense might be able to keep that momentum rolling as conference play starts.

Last year, the Bears allowed nearly 30 points per game in its non-conference games. The defense was even worse in conference play, as seven of nine Big 12 teams scored at least 34 points against Baylor.

Those struggles can be quantified in the defense’s expected points added (EPA) – the number of net points contributed by the defense, taking into account its performance on every play.

In 2012, Baylor was 107th of 120 FBS teams in this metric, with -121.8 defensive EPA. Among members of BCS-AQ conferences, only Colorado, West Virginia and Kansas were worse.

What a difference a year makes. This season, Baylor leads FBS with 87.3 defensive EPA. In contrast, Baylor entered Big 12 play in 2012 with 3.2 defensive EPA.

Baylor’s offense has been even better this year than it was last year when the Bears finished tied for fourth in the FBS in scoring with 44.5 points per game.

Baylor has scored at least 69 points in each of its first three games this season (with some help from its special teams and defense), including 70 in each of the last two contests.

The last team to score 70 points in three straight games was LSU in 1930. If the Bears top 60 on Saturday, they’ll be the second team in the last 90 years with four straight 60-point games. Oklahoma had five straight in 2008.

Bryce Petty is Baylor’s third starting quarterback in the last three years, but there hasn’t been any drop-off from Robert Griffin III in 2011 and Nick Florence in 2012.

In fact, Petty might be ahead of RG3. Petty leads the FBS in QBR this season, while Griffin finished sixth when he won the Heisman in 2011.

And the Bears have another weapon they didn’t deploy early last season.

Lache Seastrunk has run for at least 100 yards in seven straight games, tied with Arizona’s Ka’Deem Carey for the longest active streak in FBS. Through the first seven games last season, he ran for a total of 181 yards; in nine games since then he’s averaged 139 yards per game.