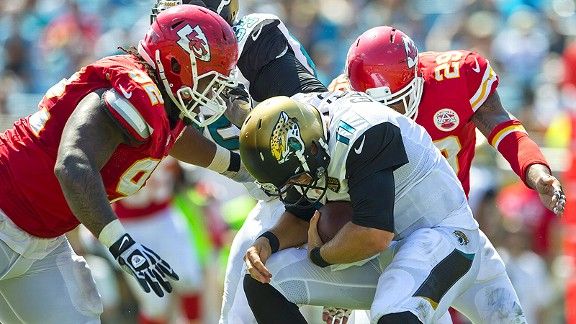 The two teams meet in Tennessee this weekend, so one of their respective rises up to fifth and 13th in the Power Rankings this season will be put on hold

Each team's vast improvements on defense, however, could ensure that any fall may be short-lived.

Not only have the Chiefs recorded the most sacks this season (18), they’ve sacked quarterbacks at the highest rate in the NFL (10 percent of dropbacks).

Although Justin Houston is tied for the league-lead with 7.5 sacks this season, nose tackle Dontari Poe may be having just as big of an impact.

Poe has recorded 3.5 sacks this season, best among interior defensive linemen. He had zero sacks last season despite playing 75 percent of the Chiefs’ defensive snaps.

Poe’s production this season is even more impressive when you compare him to nose tackles in 3-4 defenses in recent years.

Since the start of 2008, there have been only five instances of a nose tackle recording as many as four sacks in an entire season, and none have posted more than 7.5

Poe’s pressure from the interior makes it harder for offensive lines to account for the rest of the Chiefs’ pass rush.

Eight Kansas City defenders have at least a half sack this season. Last season, they had six defenders record at least half a sack.

The Titans allowed a league-worst 29.4 points per game last season, but have shaved 12 points off that average this year.

One of the keys to the turnaround has been a strategical shift on defense.

The Titans had good production when pass rushing five or more defenders last season. The problem was they used such pressure on only a quarter of opponent dropbacks.

Titans Defense
By No. of Pass Rushers This Season

Tennessee allowed a league-worst 70 percent of passes to be completed when rushing four or fewer last season, but were a Top-10 defense when sending extra rushers (54 percent).

The Titans defense has allowed similar numbers this season, but the big difference is that the Titans are sending at least five pass rushers on 44 percent of opponent dropbacks, the third highest rate in the NFL.

The increased number of pass rushers may be the influence of Gregg Williams, now a senior assistant with the Titans’ defense.

Williams was the New Orleans Saints defensive coordinator from 2009 to 2011. During that stretch, the Saints sent five or more pass rushers exactly half the time. No other team did that more than 43 percent of the time.