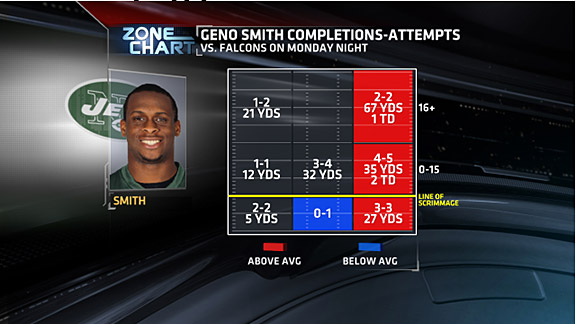 Geno Smith did it again.

Smith led the Jets to an unlikely road win on Monday Night Football in Atlanta and there were accolades aplenty for his effort.

A night to remember

Geno Smith became the second rookie starting quarterback to win on the road on Monday Night Football in 17 tries, joining Ed Rubbert, who was a replacement player for the Washington Redskins.

Smith completed 16 of 20 passes, an 80 percent completion rate that ranks best for a rookie quarterback with at least 10 attempts in a Monday Night Football game.

Prior to this season, the Jets only had two regular-season games in their history in which their rookie quarterback led a fourth-quarter comeback win (in 1973, by Bill Dmemory against the Patriots and in 1984 by Ken O’Brien against the Bills).

But even bigger than that: He’s the first rookie in the Super Bowl era to go on the road and have a game in which he completed at least 80 percent of his passes, threw for at least three touchdowns, and had no interceptions.

Smith’s poise was what won him the game.

Smith was good early in the game when the Falcons sent at least five pass rushers. He completed 6-of-7 attempts for 62 yards in those situations, including two touchdown passes.

In his first four games, Smith was vulnerable to that aggressive of a rush, going 25-for-48 with two touchdowns, two interceptions and seven sacks.

The Falcons would only sack him once with a five man rush on Monday.

Smith also looked very composed in the fourth quarter, going 6-for-6 with a touchdown pass, and 4-for-4 on the Jets final drive.

Smith was 14-for-27 with three interceptions in the fourth quarter in his first four games.