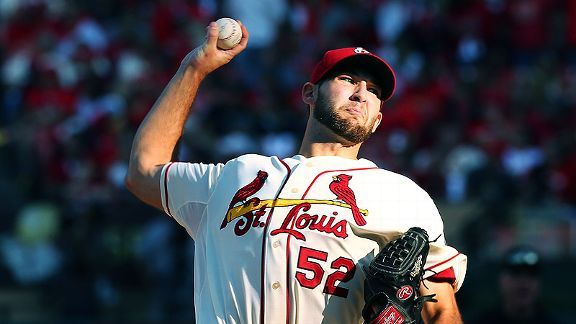 The St. Louis Cardinals took a 2-0 lead in the National League Championship Series with a 1-0 win on Saturday over the Los Angeles Dodgers. Leading the way was rookie right-hander Michael Wacha who pitched 6⅔ scoreless innings with eight strikeouts after allowing one earned run and striking out nine against the Pirates on October 7.

In doing so, Wacha became the second pitcher in Cardinals history with back-to-back postseason starts of at least eight strikeouts and one or fewer runs allowed. The other? Bob Gibson in the 1968 World Series.

At just 22 years old, Wacha also became the fifth player (sixth instance) that young to strike out at least eight hitters in a scoreless postseason outing all-time. Steve Avery of the Braves was the last to do it in the 1991 NLCS against the Pirates (Games 2 and 6).

The Cardinals’ lone run came on a Jon Jay sacrifice fly in the fifth that scored David Freese, but the run was unearned because Freese had advanced to third base on a passed ball earlier in the inning. The Dodgers became just the seventh team in MLB history to lose a 1-0 postseason game on an unearned run and the first since the 2001 Astros.

The Game 2 win was even more unlikely for the Cardinals because they managed just two hits. No team had won a postseason game with two or fewer hits and no homers since the Athletics in Game 4 of the 1974 ALCS against the Orioles. St. Louis became just the fourth team to accomplish the feat all-time (also the 1947 Dodgers and 1948 Braves).

Dodgers starter Clayton Kershaw allowed just that one unearned run over six innings but took the hard-luck loss. No pitcher had gone at least six innings, allowed no earned runs, AND took the loss in a postseason game since the Mets' Al Leiter in the 1999 NLCS against the Braves. New York would go on to lose that series in six games.

Offensively for the Dodgers, Yasiel Puig became the second player in team history - and only position player - to go 0-4 with four strikeouts in a postseason game. He joined pitcher Jerry Reuss, who did it twice against the Astros in the 1981 NLDS.

The good news for the Dodgers looking ahead is that they have overcome 2-0 series deficits on three occasions, second most in MLB history (Yankees have done it four times). Los Angeles last did it in the 1981 World Series against the Yankees.