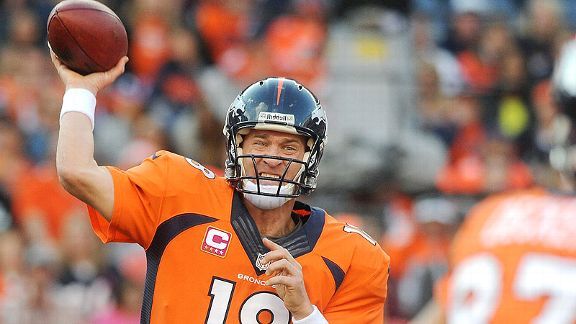 Peyton Manning beat the Jaguars Sunday, but posted a QBR in the 70s for the first time this season.

As a reminder, Total QBR is a quarterback rating that takes into account all of a QB’s significant contributions (passing, rushing, sacks, fumbles, penalties) to his team’s scoring and winning and summarizes them into one number on a 0-100 scale, where 50 is average. Since 2008, the team with the higher QBR has won about 85 percent of the time. Complete QBR statistics for all quarterbacks can be found here.

Peyton Manning posted a 74.0 Total QBR Sunday, his LOWEST this season. For context, a Pro Bowl-level of performance usually means a Total QBR between 65 and 70 over an entire season.

Manning’s Total QBR of 90.1 is the best in the NFL this season, and slightly ahead of Tom Brady’s 2007 pace through six games when the Patriots went 16-0.

Tom Brady’s game-winning touchdown pass with five seconds remaining in the fourth quarter Sunday was the latest go-ahead passing touchdown of his career.

Aaron Rodgers completed 10-of-19 (52.6 percent) passes targeting his wide receivers, his lowest completion percentage on such passes in a game this season.

Rodgers, whose 55.2 Total QBR this season is his lowest through five starts in a season in his career, could have issues if Randall Cobb or James Jones miss significant time.

• Nick Foles posted an 89.8 Total QBR against the Tampa Bay Buccaneers, his highest Total QBR in any of his seven career starts. Foles second-half Total QBR of 99.95 (6-of-7 passing, 145 yards, 2 TD), trails only Cam Newton in Week 3 for the highest Total QBR (99.99) in a second half this season.