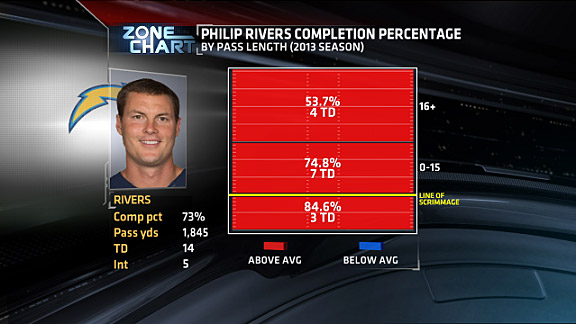 Philip Rivers has been accurate both on short and long throws in 2013.What were the biggest keys to the San Diego Chargers 19-9 win over the Indianapolis Colts on Monday Night Football?

Chargers quarterback Philip Rivers had another efficient game, throwing for 237 yards and a touchdown, with no interceptions.

Rivers went 17-for-20 for 145 yards on throws that traveled five yards or fewer downfield.

Rivers was 9-for-9 on those throws when targeting Keenan Allen, whose catch total was a career high. Keenan Allen had his second straight game with at least 100 receiving yards. He's the first Chargers player with back-to-back 100-yard games since Malcom Floyd in 2011. Rivers was also 5-for-5 when throwing to Danny Woodhead.

As the image above shows, Rivers currently rates above average in terms of accuracy on short, intermediate and deep throws. His 77.0 Total QBR in 2013 trails only Peyton Manning.

The Chargers limited the Colts to 21:29 of possession time, their lowest in a game with Luck as their starter.

San Diego managed to hold on to the ball so long because of their running game. The Chargers ran for a season-high 147 yards Monday, including 96 yards between the tackles, their most in a game since Week 9 of last season. Ryan Mathews had season-highs in rushes (16) and yards (67) between the tackles.

The Chargers’ rushing success led to the offense averaging 8.4 plays per drive, the most by a team in a game in the last two seasons.

Luck’s receivers don’t help his cause

The Colts managed only nine points, matching their fewest in a game with Andrew Luck as their starting quarterback.

When Luck threw the ball, his receivers hurt him with four dropped passes. They’ve registered at least four drops in each of the last two games after totaling only two dropped passes in their first four games.

Reggie Wayne did have five catches, becoming the ninth player in NFL history with at least 1,000 receptions in his career.

Chargers kicker Nick Novak had four field goals, including one from 50 yards to put the Chargers up by 10 points.

This was the second time Novak was 4-for-4 in a game this season. Prior to this season, Novak had only twice made at least four field goals and been perfect on his kicks in any game in his career.

The 50-yarder was his longest of the season and put him over 50 percent on kicks of at least that long (7-for-13) for his career.

Novak is 12-for-14 on field goal tries of 40 yards or longer over the last two seasons, tied for fifth-best in the NFL in that span. Both misses are from 50 yards and beyond.