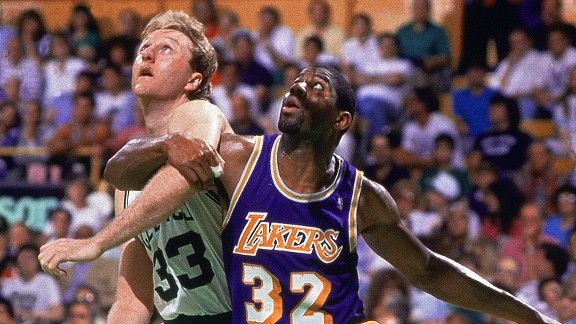 Larry Bird and Magic Johnson met in the NBA Finals three times in the 1980s.

This Saturday night, UFC Heavyweight Champion Cain Velasquez will fight Junior dos Santos in Houston for the third time. It could go down as the greatest trilogy in Mixed Martial Arts. It also joins these other notable trilogies in sports.

Muhammad Ali and Joe Frazier fought three times over a span over four years, with Ali winning the final two matchups. The final matchup was billed as the “Thrilla in Manila” and ended by TKO after Frazier’s corner threw in the towel.

NBA: Bird vs. Magic in the NBA Finals

Larry Bird and Magic Johnson were synonymous with the NBA Finals in the 1980s, facing one another three times. Bird won the Finals MVP in 1984 as the Celtics won, but Magic and the Lakers won in 1985 and 1987. Johnson won Finals MVP in 1987.

NFL: Steelers vs. Cowboys in the Super Bowl

Tennis: Federer vs. Nadal at Wimbledon

And on the courts of Wimbledon, Roger Federer won the gentlemen’s singles title from 2003-2007. He defeated rival Rafael Nadal in 2006 and 2007, but the Spaniard would grab the title from Federer in 2008 over a 4-hour, 48 minute battle in five sets.