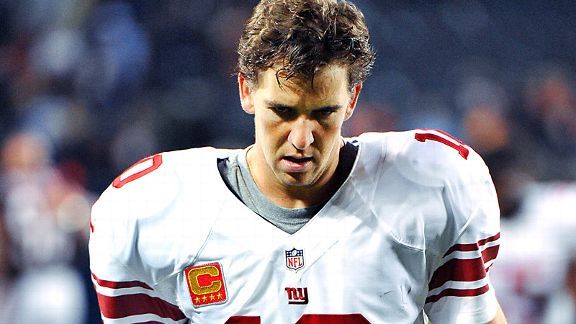 Eli Manning leads the NFL in turnovers this season (17).

1. The Giants lead the NFL with 23 turnovers -- six more than any other team and two more than they had all of last season. According to the Elias Sports Bureau, they’re the first team to have a turnover differential of -16 through six games since 1989, when the Lions and Cardinals were each -17 at that point.

His Total QBR of 3.0 in the fourth quarter is the lowest in the NFL this season. But he needs just 215 passing yards to pass Phil Simms for the most in franchise history.

QBs on Vikings Roster This Season

2. Josh Freeman is expected to make his debut with the Vikings. Only three players (out of 37 qualified quarterbacks) have a lower Total QBR than Freeman this season (26.8).

3. Adrian Peterson is fourth in the NFL with 483 rushing yards. He'll need to pick up the pace to approach his 2012 total of 2,097 yards, which was the second-highest season total in NFL history.

Adrian Peterson Through 5 Games
Past 2 Seasons

He’s 75 yards shy of tying Earl Campbell for 31st on the league's all-time rushing list and 121 from tying Shaun Alexander for 30th.

4. This game features teams that rank last and next-to-last in the NFL in opponents’ third-down conversions, and are 30th and 32nd in the league in opponents’ points per game.

5. The Giants are 0-6 for the second time in franchise history (started 0-9 in 1976). According to Elias, they're the first team in NFL history to allow at least 25 points and commit at least three turnovers in each of its first six games.

6. Neither team has won a game in North America this season. The Vikings' only win came in London against the Pittsburgh Steelers in Week 4.