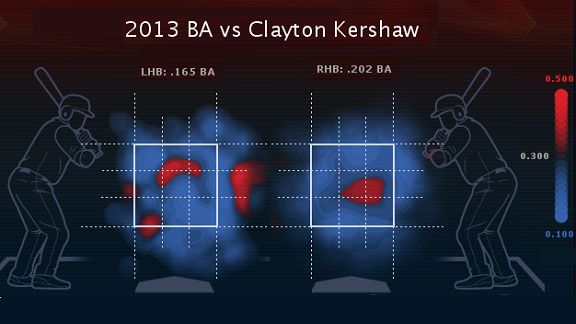 Clayton Kershaw dominated everyone in 2013.Dodgers starter Clayton Kershaw got the trophy to go along with his historic 2013 season, winning the National League Cy Young Award on Wednesday night.

Kershaw became the 17th pitcher to win multiple Cy Young Awards and the second Dodgers pitcher to do so, joining Sandy Koufax, who won in 1963, 1965 and 1966.

Kershaw’s 1.83 ERA led the National League for the third straight season. He joined Koufax and Greg Maddux as the only NL pitchers to win three straight ERA titles. Kershaw also posted the lowest ERA by a left-handed starter since Ron Guidry had a 1.74 ERA in his Cy Young Award winning season for the 1978 Yankees.

As the heat map atop this story shows, Kershaw was almost impossible to hit for both left-handed and right-handed batters.

Left-handed hitters hit .165 against him, the third-lowest batting average for any starting pitcher.

Right-handed hitters hit .202, which ranked sixth-best in the majors and, most notably, was the best for any left-handed pitcher.

What makes Kershaw so challenging, and allows him to neutralize the advantage that most right-handed hitters have against lefty pitchers is that he has a devastating breaking ball to go along with a fastball that ranges from 93 to 95 mph.

Kershaw threw 350 curves to right-handed batters. They netted 101 outs (including 58 strikeouts) and yielded only 10 base hits.

Kershaw's 157 breaking-ball strikeouts in total last season were the most of any pitcher in the National League (A.J. Burnett ranked second with 134).

Kershaw became only the sixth left-hander to win multiple Cy Young awards and the first lefty to win the award twice before turning 26.

The Elias Sports Bureau noted that the four others to win multiple Cys before turning 26, all righties, were Denny McLain, Bret Saberhagen, Roger Clemens and Lincecum.