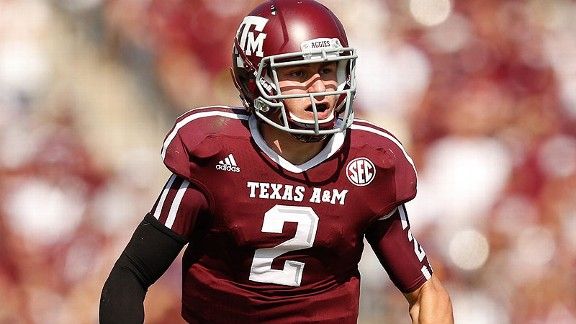 Johnny Manziel was held in check by LSU in their meeting last season.

In his first season, Johnny Manziel set the SEC record for total yards and was responsible for the most touchdowns (47) in the FBS. The Aggies finished with more than 10 wins for the fourth time in school history and had their best final ranking in the AP Poll (no. 5) since 1956 when Bear Bryant was the head coach. Manziel capped off the season with a Heisman Trophy and a Cotton Bowl win over Oklahoma.

This season his numbers are similar to what he posted last season, if not better. He has been responsible for an FBS-high 39 touchdowns and ranks second in total yards per game (392.4) behind only SMU's Garrett Gilbert.

His team continues to win, as well. The Aggies are 8-2 for the second straight season and are on pace to win 80 percent of their games in back-to-back seasons for the first time since 1993-94. They have scored at least 40 points in 13 straight games, tied with the 2011-12 Oregon Ducks for the longest streak ever by any FBS team. The last time the Aggies were held to fewer than 40 points was during their 29-24 win in Tuscaloosa last November. In their next matchup, Texas A&M scored 42 points on Alabama, the most the Tide has ever allowed under Nick Saban.

Manziel has been at his best away from Kyle Field, where he is 9-0 as a starter. He has posted an opponent-adjusted QBR higher than 85 in every game away from home during his career, the longest streak for any player in the last 10 seasons.

Manziel has used his legs more on the road. He is averaging 128.6 rushing yards per game away from Kyle Field, including six of his nine career 100-yard rushing games. He gained 766 of those yards on scrambles, 264 more such yards than he has had at home and 79 more than any other AQ player has total during the last two seasons.

This week, Manziel will face the test of all tests: Death Valley, “where opponent’s dreams come to die,” as Les Miles said after LSU's 23-21 win over No. 3 South Carolina last season. The Tigers are 31-2 at home in the last five seasons. The only losses were to Florida in 2009 and last season against Alabama. During that stretch, they have allowed 15.9 points per game, with no team scoring more than 36 in a game.

In last season’s matchup at Kyle Field, LSU held the Aggies to 19 points, their second fewest in any game in the last two seasons. It is the only game in Manziel’s career that he did not account for a touchdown. He finished with a 51.2 opponent-adjusted QBR, his lowest career game by 21.3 points. Manziel struggled on third down, completing 2-of-8 passes for 14 yards and an interception.

LSU was able to limit Manziel’s ability to improvise. He averaged a career-low 2.6 yards per play outside the pocket, including nine yards on eight such plays in the second half. For his career, Manziel is averaging 7.9 yards per dropback (sacks, scrambles and passes) when he leaves the pocket. He has gained 644 more yards and scored 15 more touchdowns on such plays than any other AQ quarterback in the last two seasons.

Manziel will get his chance at revenge Saturday. LSU will be the fourth team that the Aggies have played this season that held them to fewer than 40 points last season. In the first three games, Manziel averaged 508 total yards per game and was responsible for 12 touchdowns, with the Aggies scoring 44.7 points per game. If Manziel can keep this trend alive in Death Valley, his dream of a second Heisman Trophy might become a reality.