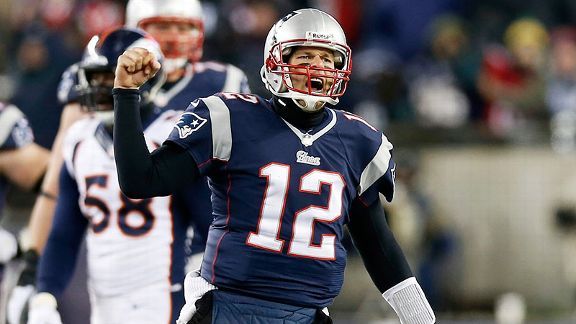 Tom Brady and the Patriots rallied from a 24-0 halftime deficit With their 34-31 overtime victory Sunday night, the Patriots became just the 2nd team since 2001 to win a game after trailing by at least 24 points at the end of the 1st half. The only other team to win after trailing by that much? Denver last season against San Diego.

Should the Packers have gone for it?

But according to ESPN’s win probability model, this decision did not give the Packers their best chance of winning. Going for the touchdown would have made a Packers victory more likely.

Since 2001, NFL teams are 30-for-66 scoring a TD on 4th-and-goal from the 2 (45%). Taking into account the risk of not making it, the Packers would have had an 82 percent win probability had they gone for the touchdown on 4th-and-goal.

There was very little to gain from making the field goal - approximately 71% chance to win versus 67% if the Packers missed but left the Vikings backed up.

The upside of the touchdown – guaranteed victory – makes going for it, given the fact that teams had scored a touchdown on 45% percent of previous such attempts, the better decision.

On the 1st 10 Cowboys drives against the Giants, Tony Romo posted a total QBR of 32.3. The Cowboys converted 12.5 percent of their third downs and punted 7 times.

On the final drive, Romo posted a 92.8 QBR and went 3-for-3 on third down, converting all of those attempts for 1st downs. The Cowboys chewed 4:45 of clock as they drove 64 yards downfield, allowing Dan Bailey to kick the 35-yard game-winning field goal as time expired.

It shouldn’t come as a surprise – since 2011, Romo has 11 game-winning drives in the 4th quarter or overtime, most in the NFL.

Over last 3 seasons, Romo has posted a 75.0 Total QBR with his team trailing by one score or tied in the 4th quarter or overtime, 4th best among quarterbacks with at least 10 such games in that span.

It was a wild one in Kansas City, as the Chiefs and Chargers traded blows, but the usually dominant Chiefs defense could not keep up with San Diego.

Entering the week, the Chiefs defense had added an average of 9.4 expected points per game, best in the league and on pace to be the best by any defense since 2009.

Sunday, the Chiefs D posted a minus-25.0 EPA, the 9th-worst EPA posted by a defense in any game this year. Chargers receivers ran for 228 yards after the catch, the most the Chiefs have allowed since at least 2006. Philip Rivers posted an 86.7 QBR, more than 59.4 rating points higher than the Chiefs NFL-best average entering the week.

While the Chiefs defense struggled, the offense was the best it’s been in a while. The Chiefs offense posted a 16.4 EPA, the best output Kansas City has had in a game since 2010. Alex Smith posted a season-high 79.4 Total QBR.