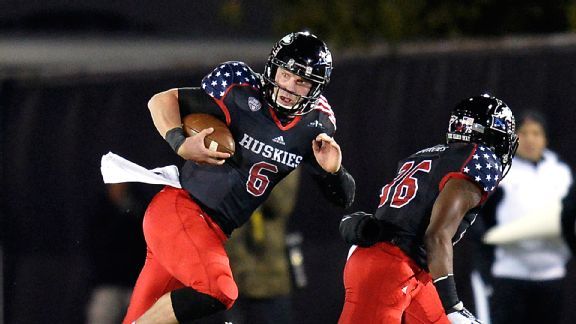 Northern Illinois QB Jordan Lynch is making a case for the Heisman Trophy.Jordan Lynch ran for 321 yards on Tuesday, breaking his own FBS record for rushing yards by a quarterback, and is being mentioned more and more as a Heisman Trophy contender each week. He improved to 24-2 in his two seasons as a starting quarterback.

Here are some nuggets on the special season he’s having, and the incredible career that has only two games left:

• He's the fifth QB in FBS history with 20 passing touchdowns and 20 rushing touchdowns in the same season. Three of the previous four won the Heisman Trophy, and the one that didn't lost out to another guy on the list (see below).

• Lynch has 1,755 rushing yards and 20 touchdowns this season, numbers that are very comparable to the numbers put up by the past five Heisman-winning RUNNING BACKS. And Lynch still has the MAC Championship Game and a bowl game left to play.

• It’s his third career 200-yard rushing game. Denard Robinson (5) and Pat White (4) are the only FBS quarterbacks with more such games in the past 10 seasons.

• It’s his 17th career game with a passing touchdown and a rushing touchdown. Only four FBS players have more since his freshman year in 2010.

• He’s got the second- and third-best rushing games in the FBS this season, trailing only Boston College’s Andre Williams, who ran for 339 yards against NC State 10 days ago.

• Williams is the only player with more rushing yards than Lynch this season. The next quarterback on the FBS rushing list is 18th in the country in rushing.