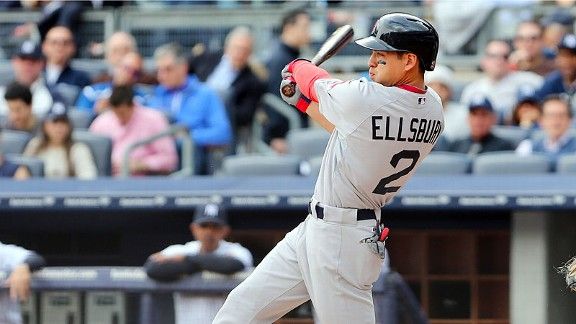 Jacoby Ellsbury will be wearing a different jersey the next time he swings a bat in the Bronx.The New York Yankees would not be left out of a busy Tuesday of baseball transactions.

Ellsbury’s top attribute is his speed. He has led the American League in stolen bases three times, including in 2013 when he stole 52 in 56 attempts.

Most Wins Above Replacement
Outfielders Since 2011

He should find the short porch of Yankee Stadium to be tempting. Of his 53 home runs in the past five seasons, 48 were hit to right or right center.

Ellsbury also rates as a high-caliber defensive player. The Yankees will have to decide between playing him or Brett Gardner in center field.

Last season, the two played almost the same number of innings at the position.

Ellsbury finished with 13 Defensive Runs Saved, sixth-best in the majors and seven more than Gardner.

Gardner has also shown that he can handle left field well. From 2010 to 2012, he led all left fielders with 50 Defensive Runs Saved.

Yankees needed to bolster their offense

The Yankees had ranked in the top three in the majors in OPS in every season from 2009 to 2012.

The key for the Yankees will be in keeping Ellsbury on the field.

That’s a lot of money

Ellsbury’s reported seven-year deal would net him an average of $21.86 million per season. That’s about a million dollars more than he made in total from 2008 to 2013.

He would be the fourth player to sign a free-agent deal with the Yankees that was worth more than $150 million, joining CC Sabathia, Mark Teixeira and Alex Rodriguez.

The only outfielders to get larger contracts than the total value of Ellsbury’s are Manny Ramirez and Matt Kemp, both of whom signed eight-year deals worth $160 million.

There are nine active players with at least 200 stolen bases and an 80 percent success rate on their steal attempts.

The signing of Ellsbury would give the Yankees, at least for the moment, three of them: Ellsbury, Ichiro Suzuki and Rodriguez. Brett Gardner could join that mix this coming season, as he enters with 161 steals and an 81 percent success rate.