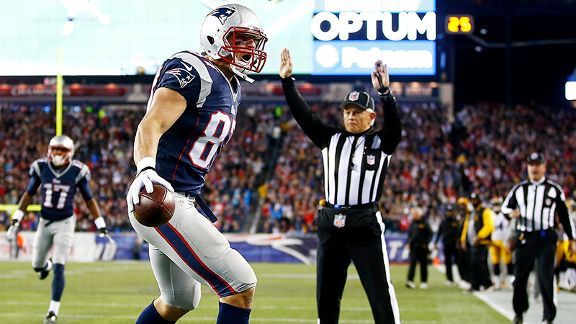 The Patriots offense will be much less explosive without Rob Gronkowski

According to ESPN and Media reports, Rob Gronkowski suffered a season-ending ACL and MCL tear after being upended by safety T.J. Ward in the third quarter of yesterday’s game. This is a significant blow to the Patriots, who came back to beat the Browns and secure their 11th consecutive season with at least 10 wins.

What Gronk means to the Pats Offense

The Patriots go back to "life without Gronk" which

Patriots NFL Ranks This Season
With & Without Rob Gronkowski

was not a pretty sight the first time around this season. The Patriots offense ranked among the league's worst the first six weeks of the year when they last played without the tight end.

The Patriots are second in the league in points per game since Gronkowski made his season debut in Week 7, scoring over 11 more points per game than they did in the first six weeks of the season.

They ranked in the top five in most offensive categories with him in the lineup this season.

The Patriots have also been much more effective

Since Gronkowski’s forearm injury in Week 11 of last season, he has missed 11 of the Patriots next 20 games (including playoffs) during that span.

Is Brady better with Gronk?

This season, the connection between Brady and Gronkowski was not as strong as their first three years together. From 2010 to 2012, Brady threw only two interceptions to go along with 38 touchdowns when targeting Gronk.