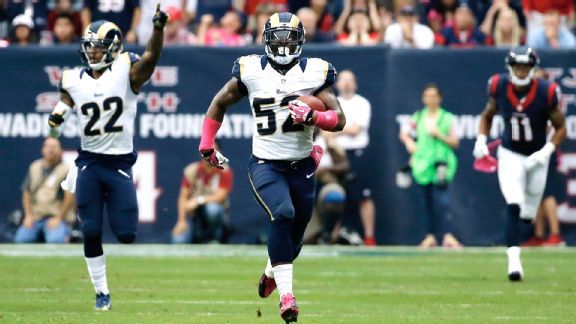 Alec Ogletree is among the players the Rams selected with picks received in the RGIII trade.Less than two years ago, the Washington Redskins made a franchise-changing deal when they traded with the St. Louis Rams to get the second-overall pick in the 2012 NFL Draft, selecting Robert Griffin III. To get that pick, the Rams received three first-round picks and a second rounder.

Griffin and the Redskins’ performance have been broken down in detail this season. But, in the end, the Rams may have gotten better end of the deal, as they’ve turned the first three picks into seven players, including three defensive starters, and still have the Redskins 2014 first-round pick in hand.

Here’s a look at what each of those picks have become.

The Rams didn’t trade down far to make the original trade, only moving down from second to sixth. But from there, the sixth pick was again traded down again, this time to the Dallas Cowboys for the 14th-overall pick and a second-round pick.

The 14th pick became defensive tackle Michael Brockers, who has 9.5 sacks in his two NFL seasons. This season, Brockers has started every game, and his 5.5 sacks are tied for seventh among all defensive tackles.

The second-round pick originally received was traded to the Bears for the pick that became Alshon Jeffery. The Rams moved down five spots in the deal, selecting running back Isaiah Pead, who has mostly contributed on special teams this year. St. Louis also picked up a fifth-rounder in the deal, tackle Rokevious Watkins, who was waived after his rookie season.

The Rams actually held on to this pick, and wisely so, as they selected cornerback Janoris Jenkins.

Jenkins has already emerged as one of the top cornerbacks in the NFL, starting all 14 games this season. He has 12 pass breakups this season, which is tied for the fourth-most in the NFL.

The Rams again traded this pick (22nd overall) down, this time to the Falcons, picking up an extra third and sixth-round pick, giving up a seventh-rounder in the deal.

Moving down eight spots in the first round, St. Louis picked LB Alec Ogletree, who has started all 14 games as a rookie. His 102 tackles rank first on the team and T-24th in the NFL. He’s tied for 13th in the NFL with nine tackles for loss, and his eight pass breakups are second in the NFL among linebackers.

The third-round pick became wide receiver Stedman Bailey. He only has 10 receptions for 149 yards in his rookie season, but eight of those receptions and 118 of the yards have come in the last three games, both team highs in that span.

The Rams took the sixth-rounder, and packaged it with their existing sixth-rounder to move up to the fifth round to get starting RB Zac Stacy. Stacy’s 854 rushing yards this season are second among rookie running backs.

The Rams greatest haul in the deal could come in the next draft, as they will receive the Redskins’ first-round pick this year, which as of right now, stands as the second-overall pick.

In Todd McShay’s first mock draft, he has them selecting Texas A&M OT Jake Matthews in that spot.