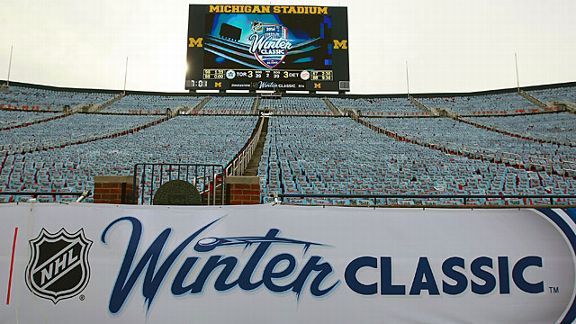 These seats will be filled with hockey fans on Wednesday.What are the top stats to know for today’s Winter Classic at Michigan Stadium? Here’s a quick snapshot.

1-- The NHL will stage its sixth New Year’s Day outdoor game (and eighth regular season outdoor game overall). The Detroit Red Wings are taking part in the Winter Classic for the second time (defeated the Blackhawks at Wrigley Field in 2009), while the Toronto Maple Leafs are in the event for the first time.

2— This is the second time Michigan Stadium has hosted an outdoor hockey game. In December of 2010, “The Big House” hosted a college game between Michigan and Michigan State that was played before a crowd of 104,173 and acknowledged by Guinness World Records as the largest crowd ever for a hockey game.

The current highest attendance for an NHL outdoor game is 71,217, set in the inaugural Winter Classic between the Penguins and Sabres in 2008.

3-- Weather could be a factor on Wednesday. The current puck-drop forecast for Ann Arbor (according to weather.com) is 18 degrees Fahrenheit with light snow and wind.

Of the seven previous outdoor regular season games in NHL history (five Winter Classics & two Heritage Classics), only two featured a temperature at puck drop of under 20 degrees. Both of those games were played in Canada.

4-- This season’s Winter Classic is the first in a series of outdoor games to be played in the NHL in 2013-14. The league will also hold five more outdoor games between January 25 and March 2.

5-- This event has not been a good one for the home team. Of the seven combined Winter and Heritage Classics, only two have been won by the hosts.

6-- Five players have scored multiple goals in a Winter/Heritage Classic, though there has yet to be a hat trick. Those who have done the tallying have tended to be role or mid-level players. Only one of those five—Richard Zednik—has scored as many as 30 goals in an NHL season.