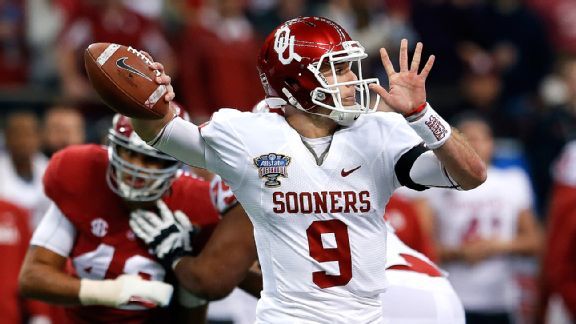 Oklahoma pulled off a big upset in the Allstate Sugar Bowl as Bob Stoops became the first coach in the BCS era to win the Sugar Bowl, Rose Bowl, Fiesta Bowl and Orange Bowl.

Alabama entered the game as the largest favorite this bowl season (-17). Their loss means the three biggest bowl favorites have all lost. Baylor lost as a 16.5-point favorite to UCF and Arizona State lost outright to Texas Tech despite being a 16-point favorite.

Freshman quarterback Trevor Knight had a breakout game with four touchdown passes. He entered the game with five career touchdowns. Knight joins Johnny Manziel as the only quarterbacks to throw at least four touchdowns against Alabama in the last 10 seasons (Manziel threw five earlier this season).

The 45 points Alabama allowed were the most since Nick Saban took over the team. In their last two games, Alabama allowed 79 points after allowing a total of 102 points in the team’s first 11 games.

The Crimson Tide lost two straight games for the first time since the 2008 season when in similar fashion to this season they lost the SEC Championship Game and followed that with a Sugar Bowl loss. That season Alabama lost to Florida in the SEC title game and then to Utah in the Sugar Bowl.

Random fact of the day:

Oklahoma’s 45 points are the most Alabama has allowed in a regulation game since a 45-30 loss to Florida in the 1996 SEC Championship Game.

That Gators’ defense was coached by Bob Stoops.