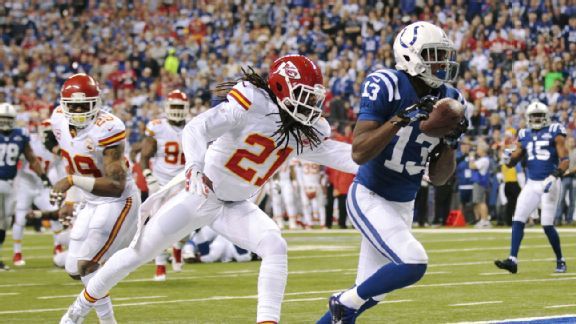 T.Y. Hilton set Colts playoff records for receptions and receiving yards SaturdayThe Indianapolis Colts staged the second-largest comeback in NFL playoff history Saturday, overcoming a 28-point deficit to edge the Kansas City Chiefs 45-44. The largest comeback came in the 1992 season when the Bills overcame a 32-point margin to beat the Oilers in overtime.

The Chiefs had a 31-10 lead at halftime. At that point, ESPN’s Win Probability model (which is based on over 10 years of play-by-play data) calculated their chances to win the game at 96.4 percent.

Entering today’s game, teams that scored 30-or-more points in the first half of a playoff game were 21-0 in the playoffs.

Kansas City then received the second-half kickoff and scored a touchdown on that drive. Their win probability peaked at 99.1 percent with 13:20 left in the third quarter.

The two teams combined for 1,049 yards to set an NFL playoff record. Their 89 combined points were the third-highest in playoff history – seven points shy of the record set by the Packers and Cardinals in a 2009 Wild Card game).

Colts receiver T.Y. Hilton had 224 receiving yards, the third-most in a game in playoff history (he set Colts franchise playoff records for receiving yards and receptions with 13).

There were also several other “firsts” accomplished Saturday:

…Alex Smith became the first quarterback in playoff history with at least four touchdown passes and no interceptions in a loss according to the Elias Sports Bureau.

…Luck also became the first player with a fumble recovery touchdown and a passing touchdown in a playoff game according to Elias.

The Colts went with a more aggressive game plan after the break. Luck completed eight of nine passes that traveled more than 10 yards downfield in the second half, connecting on all four attempts to Hilton, including the eventual game-winning touchdown. Luck was only 3-of-7 on such passes in the first half, going 1-of-3 to Hilton.

After stretching their lead to 28 points early in the third quarter, the Chiefs dropped back to pass on 23 of 33 plays (70 percent). Kansas City’s defense was only able to pressure Andrew Luck on two out of 25 dropbacks after that point.

The Chiefs managed just two field goals from that point on, as they punted twice, fumbled and turned it over on downs to help fuel the Colts epic comeback.