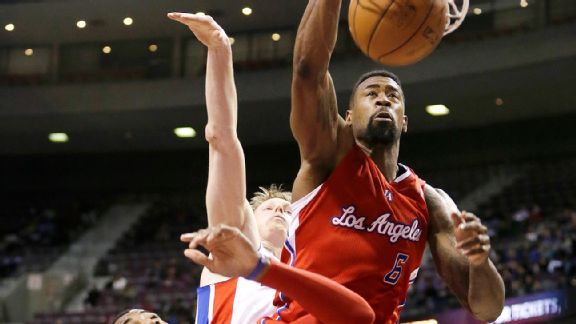 DeAndre Jordan was one of many big men to put up big numbers on Monday.Big men stole the show Monday night, as five players went for 15 points and 20 rebounds.

Just how rare is that? According to the Elias Sports Bureau, it’s the first time since Feb. 24, 1978, that five players had at least 15 points and 20 rebounds on the same day. The players who did it that day were Moses Malone, Elvin Hayes, Wes Unseld, Artis Gilmore and Swen Nater -- the first four of whom are in the Hall of Fame.

This was the third time this season Aldridge has had at least 25 points and 20 rebounds in a game. That’s as many as the rest of the NBA combined, and no player has done it more than once.

Monday was Portland’s 41st game of the season, marking its halfway point. In the past 25 years, the only players with more 25-20 games in the first half of a season are Hakeem Olajuwon, Shaquille O’Neal, Kevin Garnett and Dwight Howard.

Randolph had his first 20-20 game of the season, rebounding after two poor performances. He had more points and rebounds than in his two previous games combined. Randolph was a beast on the offensive glass, scoring 10 points off putbacks. He came into Monday averaging 2.4 PPG on putbacks this season. It was his third career game with at least 20 points, 10 offensive rebounds and 10 defensive rebounds, most among all active players.

Noah became the first NBA player this season to record at least 15 points, 20 rebounds and 5 assists in a game. It’s his second career game reaching those thresholds, having also done it last season. Prior to Noah, no Bulls player had done it since Charles Oakley in 1986-87.

It’s also his 13th straight game with double-digit rebounds, the longest streak by a Bull since Tyson Chandler did it in 13 straight in 2005-06.

Jordan continues to own the boards, recording his 20th straight game with at least 10 rebounds, the NBA’s longest active streak. When it comes to hitting the glass, Jordan has elevated his consistency. He has four separate streaks this season in which he recorded double-digit rebounds in four or more straight games. He only had one such streak in his first five NBA seasons.

The Cavaliers lost by five but don’t blame Varejao as Cleveland outscored Dallas by 12 points with Varejao on the floor. This was the third time over the last three seasons the Cavaliers lost a game in which Varejao had at least 15 points and 20 rebounds. The only other player with as many such games in a losing effort over that time span is Nikola Vucevic.