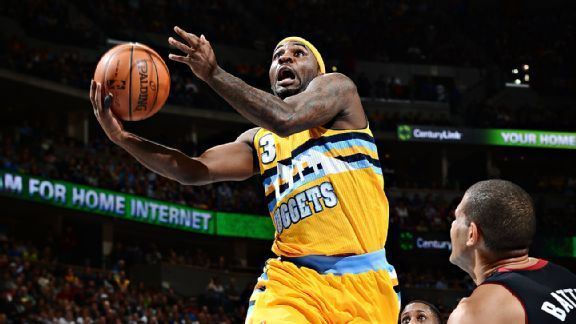 Ty Lawson has put himself among the best point guards in the game.

The NBA will announce its full All-Star Game rosters on Thursday, and a number of players have made a case to make their first appearance in the game. ESPN Stats & Information is taking a five-part look at these players.

1. The Future, Part I (John Wall and Anthony Davis)

Here is the third installment, looking at two of the emerging talents in the NBA: DeMar DeRozan and Ty Lawson. All statistics are entering Tuesday’s games.

In his fifth NBA season, DeRozan is averaging career highs in points, rebounds, assists and minutes played for the Toronto Raptors. Only 10 players in the NBA are averaging at least 21 points, four rebounds and three assists per game this season. DeRozan is one of them. Six of the other nine are All-Star Game starters.

One of the keys for DeRozan and the entire Raptors team has been trading away Rudy Gay. Since the trade, the Raptors are 16-9, after being 7-12 at the time of the deal. The trade allowed Toronto to make DeRozan the focal point of its offense, as his usage percentage has increased from 26.2 percent to 29.4 percent.

DeMar DeRozan This season
Before and After Rudy Gay Trade

As a result, the Raptors offensive and defensive efficiencies have improved by a combined 6.6 points per 100 possessions with DeRozan on the floor.

The change in the way the Raptors have used DeRozan has also contributed to his rise in success, as he has been used less in isolations and more as a pick-and-roll ball handler.

DeRozan has been used as the pick-and-roll ball handler on a career-high 20 percent of his plays, up from his previous career mark of 13 percent. He scores on over 43 percent of those plays, which would rank him 12th in the NBA (minimum 100 P&R plays).

Lawson, like DeRozan, is in his fifth NBA season and has put himself among the top point guards in the league. He’s one of four players averaging at least 17 points and eight assists per game, along with Stephen Curry (an All-Star starter), Chris Paul and John Wall.

According to player tracking data from NBA.com, Lawson created 21.4 points per game from his assists. That is second only to Paul among players who have played at least 25 games this season.

Points Created By Assists Per Game
This Season

Lawson also uses his speed to put the defense off balance. He averages 10.8 drives per game this season, the most in the NBA according to player tracking data on NBA.com. Those lead to 13.4 points per game, also tops in the NBA on drives.