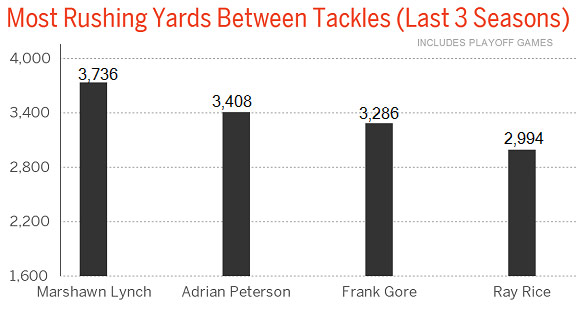 Seattle Seahawks running back Marshawn Lynch has played in six career postseason games, and he’s rushed for at least 100 yards in four of them. The Denver Broncos have allowed only one 100-yard rushing game by a player all season (Ryan Mathews, Week 15).

Both Lynch and the Broncos’ rush defense are peaking in the postseason, making the matchup one of the most important to watch in Super Bowl XLVIII.

What Lynch does well

Lynch has averaged 93.3 rush yards per game in the postseason throughout his career, same as Emmitt Smith. According to the Elias Sports Bureau, of all the players who have played five postseason games, only three have averaged more rush yards than Lynch.

As evidenced by his beastly 67-yard touchdown run in 2010 against the Saints, Lynch’s greatest strength is his strength.

The Seahawks like to run Lynch inside, as 80 percent of his rushes as a Seahawk have been between the tackles. Lynch is averaging 5.7 yards on those runs this postseason after averaging 4.1 yards in the regular season.

What the Broncos do well

The Broncos' biggest strengths in stopping the run happen to be Lynch’s strengths as well.

The Broncos are also at their toughest between the tackles, in large part due to defensive tackle Terrance Knighton .

The Broncos have allowed 3.7 yards per rush between the tackles this season (including the playoffs), tied for second best in the NFL. With Knighton on the field, that number dips to 2.9 yards. With Knighton off the field, it jumps to 4.7.

Who has the upper hand?

The Broncos finished the regular season in the top 10 of yards per rush allowed (10th), as did all three of the Seahawks’ divisional foes.

Lynch failed to gain 100 rush yards in any of his six regular-season games against division opponents, averaging 3.8 yards per rush, with 1.8 coming after first contact. Against the rest of the NFL, Lynch averaged 4.4 yards overall and 2.0 after contact.

But as the San Francisco 49ers can attest, stopping Lynch in the playoffs is easier said than done. Lynch rushed for 109 yards in the NFC Championship Game, with 41 coming after first contact (1.9 per rush). Lynch gained 43 yards after contact at 0.9 per rush in the regular season versus the 49ers.