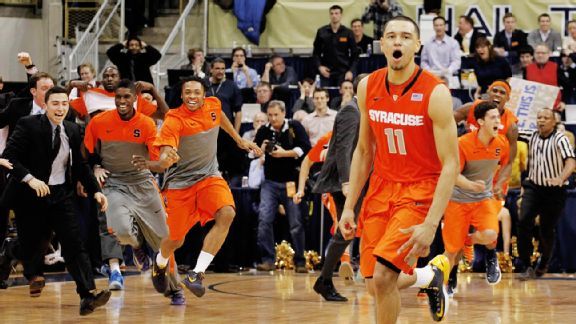 He doesn’t make mistakes when the game is on the line. In one-possession games (when the score is within three points) in the final five minutes of the second half and overtime this season, Ennis is 8-for-9 from the field and 14-for-14 from the free-throw line, with six assists and no turnovers.

He might be even more impressive on game-tying and go-ahead plays in those situations, shooting a perfect 4-for-4 from the floor and 8-for-8 from the foul line without a turnover.

Syracuse finished the game on a 10-2 run after trailing 54-48 with 1:56 remaining. According to the win probability calculator at kenpom.com, and assuming this was an even toss-up game, Pitt had a 97.7 percent chance of winning the game at that point.

The last time the top-ranked team in the nation won a game on a shot made with less than a second remaining was almost six years ago. On March 15, 2008, Tyler Hansbrough made a baseline jumper with 0.8 seconds left to lead No. 1 North Carolina over Virginia Tech (and head coach Seth Greenberg) in the ACC Tournament Semifinals.

Syracuse improves to 24-0, setting a school record for longest win streak. According to ESPN’s Basketball Power Index, the Orange have a better than 13 percent chance of finishing the regular season undefeated. Those odds doubled after Wednesday's road win.

Pitt had won all nine games it played against top-5 teams at the Petersen Events Center before Wednesday, and had beaten Syracuse five straight times at home. It was the first win for the Orange at Pittsburgh since February 29, 2004.

Did we mention Ennis is clutch?

If Ennis produced for a full 40 minutes at the same level that he does in the final five minutes of the second half and overtime, he would average 28.3 points, 8.5 assists and 0.4 turnovers.

Pittsburgh's oh-so-close Stat of the Night

Pitt is now 0-5 against teams ranked in the BPI's top 30 this season and 20-0 against every other team.