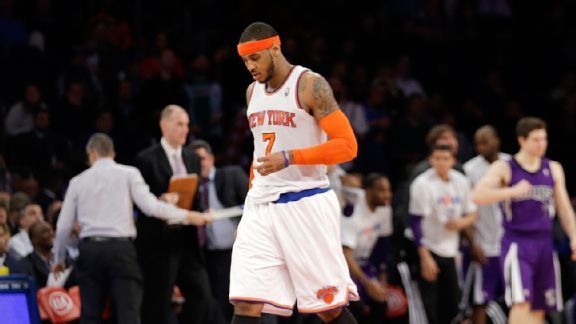 Carmelo Anthony and Knicks are struggling, but is it all on Melo?

New York Knicks forward Carmelo Anthony is shooting a career-best 41.6 percent from 3-point range. He’s averaging a career-low 2.4 turnovers per game despite averaging a career-high 38.8 minutes per game. Furthermore, he’s second in the NBA in scoring this season and he’s on pace to set a new career high in rebounding.

In fact, only 12 players have done that for an entire season in the last 40 years. Of those 12, O'Neal (eligible in 2017) and Chris Webber (eligible later this year) are the only two not yet in the Hall of Fame.

But Melo has not been hitting big shots as often as he has in the past. After last night's miss at the end of regulation, Anthony is 0-for-8 on shots with 10 seconds or less in the 4th quarter or overtime when trailing by one possession or tied this season. He's a combined 0-for-12 on such shots in the last two seasons.

From 2010-12, Carmelo was 8-for-15 in those situations, including 5-for-10 with the Knicks. No one had more makes than Anthony’s eight, and his 53.3 field goal percentage on those shots was the best among 16 players with at least 10 late-and-close attempts.

Anthony has averaged 38.8 minutes per game this season, most in the NBA and on pace to surpass his previous career high.

Is that affecting his play?

The data suggests that Melo’s production has fallen off significantly late in games, more so than ever before in his career, and it’s been getting worse since January.

In Carmelo’s first 25 minutes played of games this season, he’s been one of the NBA’s most efficient players, posting a 27.3 Player Efficiency Rating (PER), which ranks 3rd behind Kevin Durant (31.9) and LeBron James (27.8).

But his production has fallen off significantly at the 26 minute mark. After that, he’s shot just 37.6 percent with a 19.7 PER, 28th out of 72 qualifying players.

Melo’s late-game drop-off has been more pronounced since January 1, a possible indication of fatigue.

Overall, Anthony is shooting a career-low 36.7 percent in the 4th quarter this season.

Perhaps Mike Woodson should be playing Carmelo fewer minutes to conserve his energy, but the Knicks have played very poorly without Anthony on the court this season.

Knicks With Anthony On/Off Court
Per 48 Minutes This Season

Last night was case in point: the Knicks were a plus-6 in the 48:25 minutes Carmelo played, but they were outscored by 11 in just 4:35 without him.

And again, Melo faded, managing just 4 points on 1-8 shooting as he played all 17 minutes of the 4th quarter and OT.

--Contributions from Will Cohen, John Parolin and John McTigue