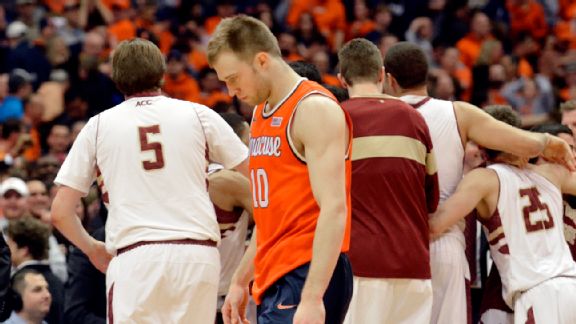 Trevor Cooney (10) and Syracuse fell from the ranks of the unbeaten against an unlikely foe.

When the night started, ESPN's BPI gave Boston College just a 1.2% chance of going into Syracuse and knocking off the top-ranked Orange.

When it was all over, the Eagles had earned their 3rd-ever win over a No. 1 team and made plenty of other men's hoops history in the process.

How big was the upset? According to BPI, last season's biggest upset of a ranked team came when TCU topped No. 5 Kansas (4.5% chance) on Feb. 6.

Boston College's win probability (1.2%) was much smaller than that, and the Eagles' .240 winning percentage entering the game is the worst ever by a team to defeat the AP No. 1 in February or later.

As for Syracuse, the Orange become only the third No. 1 team with a record of 25-0 or better to suffer their first loss of the season at home to an unranked opponent. Massachusetts in 1996 (vs George Washington) and UCLA in 1969 (vs USC) were the others.

How did it happen? Syracuse shot a season-worst 32.3% from the field, and crunch-time hero Tyler Ennis didn't help either.

Ennis was 1 for 5 from the field when the score was within a possession with five minutes or less left in the 2nd half and overtime. He had previously been 8 for 10 from the field in those situations.

The location of this game alone makes it an historic win for Boston College.

Villanova (in 1990) was the only previous team to defeat a No. 1-ranked Syracuse team on its home floor, and the Eagles entered Wednesday's game with just one true road win this season (Jan. 11 at Virginia Tech).

Throw in the fact that Boston College was just 6-19 entering the game, and the Eagles become the 3rd team with a losing record to knock off the AP No. 1 on the road, and the first in nearly 60 years.

Then again, maybe we should have seen this coming. With BC's win, each of the last six unranked teams to win a road game against the No. 1-ranked team hailed from the ACC.

If there's good news for the Orange, it's this: the last time Boston College defeated a No. 1 team, the victim was North Carolina (on the Tar Heels' home court) in 2009. Four months later, UNC won the national championship.