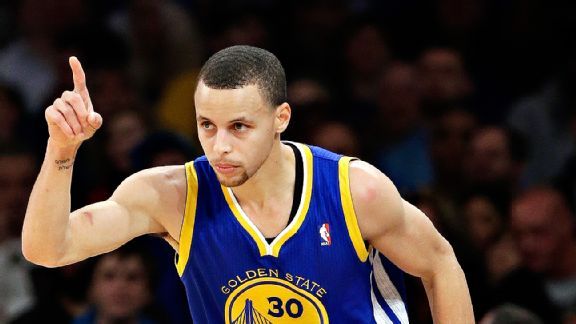 Stephen Curry now has a 50-point game and a triple-double at Madison Square Garden.How do you follow-up a 54-point performance at Madison Square Garden? A triple-double with 27 points, 11 rebounds and 11 assists sounds like a nice encore. And that's exactly what Stephen Curry did on Friday night in the Warriors’ 126-103 win over the New York Knicks.

Most Points in 1st 3 Starts at MSG
Last 40 Seasons

Curry recorded his third triple-double this season, the second-most of any player in the NBA behind Lance Stephenson, who has four.

He is only the fourth Warriors player in the last 50 seasons with at least three triple-doubles in a season and the first since Baron Davis in 2007-08, according to the Elias Sports Bureau. Before this season, Curry had only one career triple-double in 258 career games.

Elias also tells us that Curry and LeBron James are the only visiting players with a triple-double and a 50-point game at the current Madison Square Garden. LeBron has two 50-point games at the arena (Mar. 5, 2008 and Feb. 4, 2009) and got his one triple-double there on Dec. 17, 2010.

Curry once again was the leader in points and assists for the Warriors, the 27th time this season he has done that, which leads all players.

Currently ranked eighth in the league in scoring and first in assists, he is trying to be the first player to finish a season in the top 5 in both scoring average and assists per game since Nate "Tiny" Archibald in 1975-76.

With the win, the Warriors are now 5-1 since the All-Star break, helping them keep pace in the Western Conference playoff race. They are 2-1 on their current six-game trip, which takes them to Toronto, Indiana and Boston over the next week.