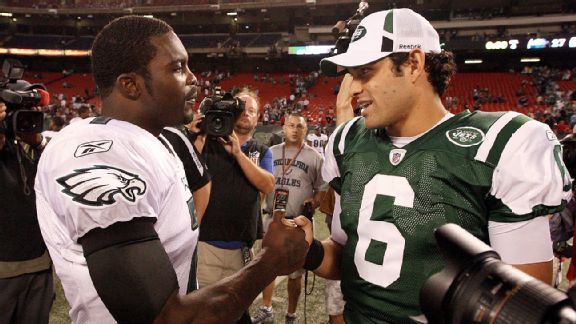 1. Since he entered the NFL in 2009, no qualified quarterback has posted a worse Total QBR than Mark Sanchez’s 36.1. His 43 fumbles in that span are the second-most in the NFL behind Joe Flacco’s 45, but Flacco logged 1,251 more snaps during that time.

2. For all of Sanchez's struggles, he was effective in the postseason. Sanchez went 4-2 as a postseason starter, beating teams led by Peyton Manning, Tom Brady, Philip Rivers and Carson Palmer. All six of his postseason games were played on the road.

3. Michael Vick completed a career-high 62.6 percent of his passes in his first season back as a full-time starter in 2010. Since then, his completion percentage has declined every year (54.6 percent last season).

Health has also been an issue with Vick throughout his career, as he has played the full 16 games just once in his 11 seasons.

Should the Jets opt to run more zone-read plays, Vick would fit that scheme well. The Eagles averaged 6.1 yards per rush on zone reads last season with Vick at quarterback. Vick averaged 14.0 yards per rush the nine times he kept the ball on those plays.

5. Pressure affects Vick more than most quarterbacks. Since Vick first became the Eagles starter in 2010, only Carson Palmer and Eli Manning have thrown more than Vick’s 15 interceptions when under pressure.

However, if he’s not pressured, Vick might be a better option than current Jets starting quarterback Geno Smith. Smith turned the ball over more than three times as often against standard pressure as Michael Vick did in his seven games played last year.

Other fun facts on Jets

The Jets have a history of making moves for a quarterback on March 21. Two years ago today, the Jets acquired Tim Tebow from the Denver Broncos.

The Jets are expected to save $8.3 million in cap dollars by cutting Mark Sanchez. Even after signing Michael Vick to a one-year, $5 million deal, the Jets have the third-most salary cap space in the league at approximately $27.5 million.