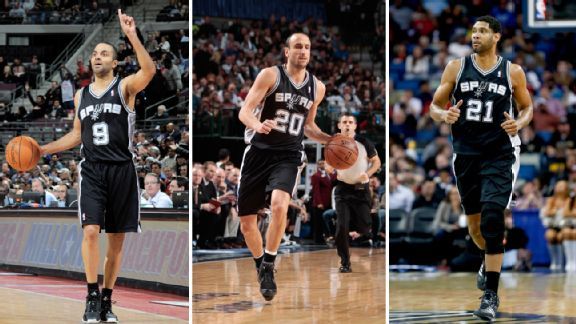 Tony Parker, Manu Ginobli and Tim Duncan have led the Spurs to the best record in the NBA.With a win tonight, the San Antonio Spurs will become the fifth team in NBA history to win 20 straight games in a season.

At 59-16, the Spurs have already surpassed their win total from last season when they made the NBA Finals.

Their efficiency on both sides of the ball has been the highlight this year, as they rank among the top five in points per 100 possessions on offense and defense.

That equates to a net efficiency of plus-9.0 points per 100 possessions, the best in the NBA, and during their 19-game run, that number is a remarkable plus-16.2.

Traditional stats may not paint a clear picture of what makes the Spurs the Spurs, but a deep dive into the NBA.com player tracking data can help explain.

The Spurs offense often works from the inside-out and does so in one of two ways.

One way is Tony Parker. Parker averages 10.2 drives per game this season, which is second in the NBA to only Ty Lawson. According to NBA.com, a drive is any touch that starts 20 feet from the basket and ends within 10 feet.

The other way is to get the ball into the post via entry passes. As a team the Spurs rank second this season in touches that originate within 12 feet of the basket according to NBA.com. Both Tim Duncan (ninth) and Tiago Splitter (11th) rank highly in individual “close” touches per game.

Move off the ball

As the ball is dribbled or passed into the paint, the rest of the Spurs get moving. According to NBA.com, no team has covered more ground on offense than the Spurs this season, recording 716 total miles traveled, four more than the next highest team.

If the Spurs don’t finish in close, expect the ball to make its way back around the perimeter.

It’s not always just one pass that sets up the shot, however. NBA.com also shows the Spurs with a league-leading 7.4 secondary (or hockey) assists per game.

The Spurs also lead the NBA in 3-point field goal percentage this season, with many of those attempts coming off quick catch-and-shoot jumpers.

San Antonio is making 42 percent of its 3-point shots when it catches the ball and releases within two seconds, according to NBA.com.

Marco Belinelli leads the way for the Spurs this season on those attempts, making 49 percent of his catch-and-shoot threes. Boris Diaw, Matt Bonner, Danny Green, Parker and Patty Mills are all shooting 40 percent on those attempts.