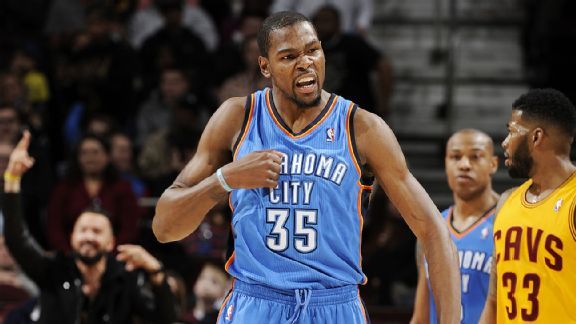 Kevin Durant has the fourth-highest postseason scoring average in NBA history.The NBA playoffs get underway on Saturday. Before they do, here’s a stat you should know on each of the eight first-round series.

• 29: The Spurs and Mavericks have played 29 playoff games dating back to the 2000-01 season, one behind the Spurs and Lakers for the most playoff games between two teams in that time. Dallas and San Antonio are separated by just 33 points over those 29 meetings, just over one point per game.

• 484: The “Splash Brothers”, Stephen Curry and Klay Thompson, have combined for 484 3-pointers this season, the most by a pair of teammates in a single NBA season. Whose record did they break? Their own (483 last season).

Hawks and Pacers
Since March 1st

• 15: The Heat and Bobcats have met 15 times since LeBron James, Dwyane Wade and Chris Bosh joined forces before the 2010-11 season. Miami has won all 15. In that same time, Miami is 14-0 against the Raptors, a possible opponent in the next round.

• 2 and 3: On the morning of January 1st, the Raptors and Nets both had a losing record. Since then, however, they’ve been two of the Eastern Conference’s best. The Nets have the second-best win percentage since January 1 (.667), the Raptors are third (.642).

• 7.8: Nobody dominated the ball like John Wall this season. He averaged 7.8 minutes of possession per game, most in the league. That’s roughly 16 percent of a regulation game.