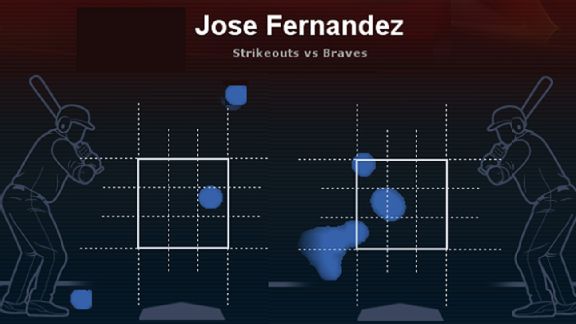 Baseball Tonight picked a good day to debate who the best pitcher in baseball is.

Jose Fernandez left little reason to vote for anyone other than him.

Fernandez finished with 14 strikeouts and no walks in a 1-0 win, the second pitcher ever to have such a line against the Atlanta Braves. The Elias Sports Bureau notes that the other was Nap Rucker in a no-hitter for the Brooklyn Dodgers (then known as Superbas) in 1908.

Fernandez became the fifth pitcher in the Divisional Era (since 1969) with a pair of 14-strikeout games before turning 22. The others are Dwight Gooden (5), Jose Rijo (2), Frank Tanana (2) and Kerry Wood (2).

Fernandez had a devastating breaking ball, one that netted him 11 strikeouts, nine of which were swinging.

Fernandez’s fastball averaged 96.1 mph, the third fastest average in a game in his career.

He finished with 26 swings-and-misses, four more than any other game he’s pitched in his career.

Fernandez has a 2.16 ERA and 0.97 WHIP in 33 starts since the start of last season. The only pitcher to rate better in those stats is Clayton Kershaw, who is currently on the disabled list.

However Fernandez's opponents' batting average in that span is .184, 11 points better than Kershaw's, and his opponents' OPS against (.522) trails Kershaw's by only three points.

On the other side

Alex Wood threw 8 innings for the Braves, gave up 1 run and got the loss. It was his second straight loss allowing one run in eight innings or more.

He’s the first pitcher to have two straight such starts in a row since Mike Norris of the 1980 Athletics and the first in the National League since Tom Seaver for the 1973 Mets.

This is the second time since 1900 that two pitchers age 23 or younger both had at least 11 strikeouts in the same game.