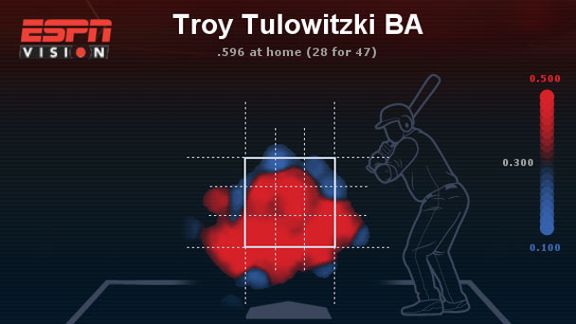 Troy Tulowitzki is almost impossible to get out at home.Sunday we told you what’s to like about the San Francisco Giants as they try to unseat the Los Angeles Dodgers in the NL West.

This time, we’ll tell you what’s to like most about the Colorado Rockies, or the three things to like most from Monday’s rout of the Texas Rangers.

Troy Tulowitzki is in a zone

The Elias Sports Bureau notes that the .596 batting average is the highest by any player in his first 14 home games of a season (minimum 40 plate appearances) in baseball's modern era (since 1900).

Tulowitzki has taken 91 swings at home this season. They’ve resulted in 28 hits and as many extra-base hits (12) as swings and misses.

Nolan Arenado is, too

It would seem odd that a player with a 25-game hitting streak isn’t the hottest hitter on his team, but that’s the case for third baseman Nolan Arenado.

Arenado pulled to within two games of the Rockies' record for longest hitting streak (held by Michael Cuddyer), extending his streak to 25 games with a second-inning home run.

Monday’s home run came on a 93 mph pitch in the lower half of the strike zone from Martin Perez.

Arenado already has three homers on lower-half pitches this season. He had only four on the 1,019 pitches he saw in that area in 2013.

Lyles is the second pitcher in Rockies history to start his time with the team with three straight home starts in which he allowed two earned runs or fewer in at least six innings pitched, joining Joe Kennedy (2004).

Lyles has tamed the ballpark by inducing ground balls. He has nearly identical ground-ball rates at home (54 percent) and on the road (53 percent). Opponents are 3-for-36 when hitting a grounder against him at Coors Field this season, including 1-for-13 in each of his past two starts.