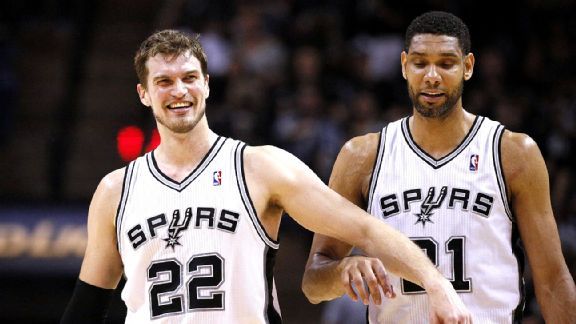 Tim Duncan and Tiago Splitter carried the defense against LaMarcus Aldridge in Game 2.

The Spurs held off a fourth-quarter rally to take a 2-0 series lead against the Trail Blazers. San Antonio's lead grew as high as 20 points as the Spurs shut down LaMarcus Aldridge and rode another strong bench performance to a dominant win.

Coming Off the Bench, This Series

During the regular season, the Spurs led the NBA in bench scoring. The Trail Blazers averaged the fewest bench points in the league.

Aldridge was held in check and struggled against the Spurs' post defenders in a 6-of-23 shooting night. Aldridge was 2-of-14 with Tiago Splitter as his primary defender and 0-of-5 when guarded by Tim Duncan. Aldridge shot 54 percent (7-of-13) when defended by Splitter in Game 1.

Aldridge particularly struggled in the paint Thursday, shooting 2-of-14. His 14 percent shooting in the paint was Aldridge's second-lowest in his career (minimum 10 attempts).

Duncan netted 10 points in Game 2 to give him 4,757 points in his playoff career, sixth-most all-time. Duncan is five points shy of passing Karl Malone for fifth on the all-time list.

Along with the scoring mark, Duncan is chasing a different record with teammates Tony Parker and Manu Ginobili. The Spurs' trio earned their 107th playoff win together Thursday. They are three shy of tying Magic Johnson, Kareem Abdul-Jabbar and Michael Cooper for the most playoff wins all-time by a trio.