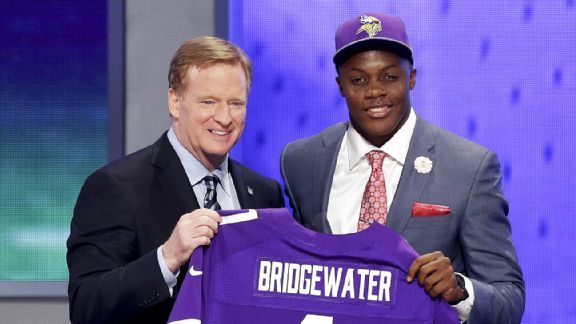 Teddy Bridgewater has never started a game in freezing temperatures.The Minnesota Vikings took Teddy Bridgewater with the final pick of the first round and he is expected to compete for the starting job in training camp.

The Vikings do have two quarterbacks on their roster -- Christian Ponder and Matt Cassel -- but neither rank higher than 25th in Total QBR among qualified quarterbacks since 2009.

His accuracy also earned him high grades among pro scouts. Bridgewater led all AQ quarterbacks in overall completion percentage last year despite having an average target distance of more than nine yards downfield.

Yet there is one lingering question about his transition to the Vikings: How will Bridgewater adapt to the cold weather in the NFC North?

The Miami native played college football at University of Louisville and did not start a single game in freezing temperatures while in college.

The coldest game that Bridgewater ever started was a 34-degree game against Connecticut on Nov. 24, 2012. Louisville lost that game 23-20 and Bridgewater had a 55.1 Total QBR, which was well below his season average (77.3).

In addition to Bridgewater’s inexperience in cold temperatures, he has a below-average hand size (9.25 inches), which could make it difficult to grip the ball when the temperature drops.

The average hand size for all quarterbacks measured at the combine since 2008 is 9.55 inches. Russell Wilson, Andrew Luck and Nick Foles all have hands larger than 10 inches.

With the Vikings playing their home games outdoors for the next two seasons, in addition to away games at Green Bay and Chicago every season, Bridgewater’s ability to adapt to cold temperatures could have an impact on his long-term success.