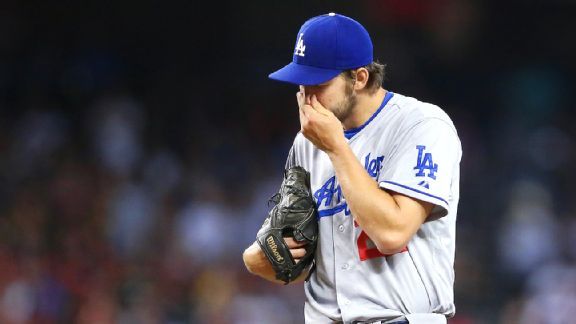 Kershaw is 1-4 with a 3.70 ERA in nine career starts against the Phillies, his worst record against any team he’s had more than one decision against. He is also 1-2 with a 4.40 ERA in five starts at Citizens Bank Park, his second-worst ERA in any currently used NL ballpark.

Kershaw noted earlier this week that he’s had trouble with his curveball in his last two starts and the numbers bear that out.

In those two games, he’s thrown 18 curveballs and netted three outs, while giving up four hits (a single, double, triple and homer) with it. Kershaw has allowed more extra-base hits on curveballs in those two games (3) than the previous two seasons combined (2).

Last year, he threw 429 curves and got 132 outs with the pitch, while giving up only 14 hits (all singles). Prior to this year, the last time he allowed a home run off a curveball was when Allen Craig took him deep on April 16, 2011.

He’s given up four hard-hit balls on the 18 curves he’s thrown over the last two starts. That’s as many hard-hit balls as he allowed among the 429 curveballs he threw all of last season.

Three of the four hits he’s allowed on his curve over the last two starts have come with two strikes, a situation in which the batter facing Kershaw is usually almost guaranteed to go back to the dugout without reaching base.

Last year, 124 of the 136 plate appearances (91%) that ended with a two-strike curveball from Kershaw resulted in outs – including 80 via strikeout.

However, Kershaw has found trouble with his curve in a small sample before. Last September in consecutive starts against the Cincinnati Reds and San Francisco Giants, opponents were 5 for 12 in at-bats ending in a curve, and four of eight curves put in play were line drives.

Matchup to watch: Kershaw vs Byrd and Ruz

Marlon Byrd and Carlos Ruiz each have good numbers against Kershaw, going a combined 12 for 26 against him, though much of that damage was done before Kershaw became an elite pitcher.

Byrd has feasted on left-handed pitching this season, hitting .372 with three home runs and three doubles in 43 at-bats. Ruiz has hit .314 against lefties dating back to the start of the 2012 season, including 8 for 24 with four extra-base hits this season.

Will the Phillies use their lefty bats?

Left-handed hitters such as Chase Utley, Ryan Howard and Domonic Brown have previously been integral to the Phillies success. But the recent trend for Kershaw’s opponents is to load their lineups with right-handed hitters. Kershaw did not face a left-handed batter in either of his last two starts.