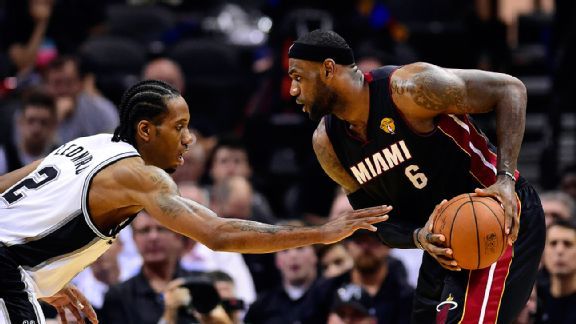 But those numbers don’t show the full impact of Leonard’s defense.

In Game 3, James had a series-high 73 offensive touches but attempted only 14 shots. James was guarded by Leonard on 65 percent of the Heat’s possessions with James on the court in Game 3, the most Leonard has defended James in any game this series.

Let’s take a look at how Leonard has made LeBron’s life more difficult in the NBA Finals.

Only 17 percent of LeBron’s touches against Leonard in the Finals have resulted in a field goal attempt. That’s half the rate James has against all other defenders. That means Leonard has been successful forcing him to pass the ball or turn it over.

James has driven to the basket on 13 percent of his touches against Leonard. That rate jumps to 22 percent against all other defenders. Leonard has been able to keep James in front of him and force tough angles to keep him away from the basket.

It all equals more Leonard vs James

Leonard finished a Heat possession on James 65 percent of the time when James was on the court in Game 3. James attempted only 14 field goal attempts in the game despite a series-high 73 touches.

Percentage of Heat Possessions
With Leonard Guarding James in Finals

The percentage of possessions with Leonard defending James has increased every game this series.

The Heat recognized the work James put in to score with Leonard on him in Game 3 and tried to adjust by setting screens. On 14 different possessions in Game 3, Leonard started a possession on James but switched off due to screens. That happened nine times total in Games 1 and 2.

James was 3-of-4 with six points and an assist in those situations in Game 3.

Whether or not the Heat overcome the 2-1 series deficit could depend on how successful James is against Leonard’s defense going forward.