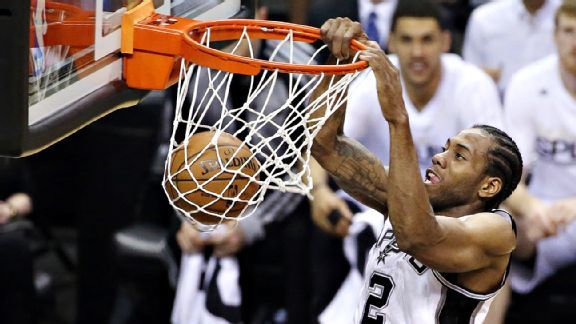 Kawhi Leonard dominated the final three games of the NBA Finals.Kawhi Leonard scored 22 points and recorded 10 rebounds Sunday night in the Spurs' 104-87 Game 5 victory en route to winning the NBA Finals MVP. At 22 years, 351 days old, he's the third-youngest recipient of that award since the NBA began handing it out in 1969.

He's also the fifth-youngest player to record at least 20 points and grab 10 boards in a series-clinching NBA Finals game and the youngest to do that since Kobe Bryant in 2001 (22 years, 296 days).

But his performance in Game 5 transcends regular box score stats. Let's take a look at his contributions.

Leonard led the Spurs in scoring the final three games of the series after scoring nine points in each of the first two games.

His offensive impact became greater when he started to attack the basket.

Leonard had just two points in the paint on seven drives in Games 1 and 2 combined. In Games 3-5, he scored 24 points on 19 drives.

He also led the Spurs in 3-point shooting in the Finals, shooting 58 percent. Leonard was a team-best 10-of-18 (56 percent) on catch-and-shoot 3-point attempts.

Better yet, he stepped it up against the Heat's best player. Leonard shot 65 percent when guarded by LeBron James in the series.

Game 5 was another reminder of Leonard’s defensive impact on James.

James attempted only one shot against Leonard in the first quarter Sunday, which in part led to him shooting 5-of-7 (71 percent) in the quarter. James was unable to get away from Leonard consistently afterward, however, shooting 6-of-14 (43 percent) the rest of the game.

Leonard's defense on James in the series was key. James shot 57.6 percent against him, but he wasn’t always able to get his shot off or even get the ball.

Only 19 percent of James' touches against Leonard in the Finals resulted in a James field goal attempt. Against all other defenders, that rate jumped to 33 percent.

When Leonard did find himself on someone other than James, his defense was still strong. The rest of the Heat shot 28 percent (5-of-18) against Leonard in the Finals.